The financial sector was the hardest hit and telecommunications fared best among the index’s 10 major industry groups.

“All sectors seem to be in a pause mode, as Washington remains a wild card due to uncertainty with policy risk,” said Terry Sandven, chief equity strategist at U.S. Bank Wealth Management.

But, looking beyond near-term budget-associated risks, Sandven expects equities to find support longer term. “Year-to-date, the market’s performance has been orderly, unemotional and broad based, which is typical of a market that wants to trend higher.”

“This is the 24th bull market since 1890, and the Dow Jones Industrial Average has gone to a new high in 14 of those 24, so it’s not unusual for the Dow to set a new high,” said Hugh Johnson, chairman of Hugh Johnson Advisors LLC in Albany, N.Y. Read a blog post on why the bull run is only so remarkable.

Watch these three stocks
Matt Jarzemsky lists three stocks that investors and traders will be focused on during Tuesday's session. Photo: Getty Images.


“It is a little surprising from the point of view of valuation. We did more in three months than I thought we would do in a year,” Johnson added.

Among individual stock movers, Yum Brands Inc. YUM +1.31%  rose 1.3% after the owner of fast-food chains KFC, Taco Bell and Pizza Hut reported sales in China declined less than estimated in the first two months of the year despite concern over its chicken suppliers. 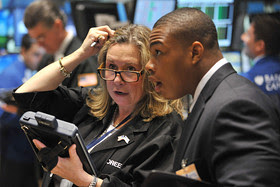 STAN HONDA/AFP/Getty Images Enlarge Image
The New York Stock Exchange trading floor. Dow is set for its longest winning run in more than two years.
House Republicans on Tuesday introduced a plan to cut the deficit to $528 billion in fiscal 2014 and then to $69 billion by 2016, kicking off a debate that is expected to bring a 10-year budget proposal from Senate Democrats on Wednesday.

See: House budget plan would slash deficit quickly
Automatic spending cuts began to take effect March 1 after politicians failed to come to an agreement to avoid a process known as sequestration. Economists expect the heavy cuts to dampen the recovery unless lawmakers reach a deal on reducing the deficit.

“Everybody is concerned about the economy either because of Europe or the sequester. Yes, the sequester will impact the economy, but it will not derail the recovery. It will reduce growth by 0.5% or 0.6% in 2013, depending upon whom you talk to,” said Johnson.

The Conscience of a Liberal The Eurobeatings Will Continue By Paul Krugman: NYT | Opinion Today March 12, 2013.


Posted by Fernando Guzmán Cavero at March 12, 2013 No comments: