By Kate Gibson, MarketWatch
NEW YORK (MarketWatch) — U.S. stocks rose Thursday, with the Dow Jones Industrial Average closing at another record high, as jobless claims fell to a six-week low, casting a positive spin on the labor front a day before the monthly employment report.

“The four-week moving average has come down significantly, from 335,000 to 348,000. And it correlates with the ADP number, which is usually a pretty good sign of where we are headed, so another piece of good news that could keep the train rolling,” said Art Hogan, market strategist at Lazard Capital Markets.

After finishing at a record high on Wednesday for a second day straight, the Dow industrials DJIA +0.23% on Thursday rose 33.25 points, or 0.2%, to 14,329.49, with the blue-chip index extending gains into a fifth session. See: Stock bulls versus bears: a 12-chart battleground.
Equities have been on a roll on improving housing-market data and growth in corporate earnings, along with support from the Federal Reserve’s continuing policy of monetary easing. The Dow is up 9.4% so far in 2013, and the S&P 500 is ahead 8.3% for the year.

Dell among stocks to watch
Michael Casey outlines three stocks to watch on Thursday, including Dell. Carl Icahn is pushing for a huge special dividend instead of a leveraged buyout by founder Michael Dell.

“Typically, the stock market moves up about 2% to 3% following a breakout to a new all-time high, then begins a modest correction,” Fred Dickson, chief investment strategist at Davidson Cos., wrote in emailed commentary.

Ciena Corp. CIEN +17.34% gained 17% after the fiber-optic networking-equipment maker posted quarterly earnings that beat estimates; PetSmart Inc. PETM -6.57% fell 6.6% after projecting earnings and sales growth below estimates, and Colgate-Palmolive Co. CL +0.05% rose 0.1% after the seller of soap and household cleaners hiked its dividend and approving a 2-for-1 stock split.

The euro EURUSD -0.01% gained against other major currencies, including the U.S. dollar, after the European Central Bank held its benchmark rate at a record low and ECB President Mario Draghi said economic reports point to a stabilizing economy. 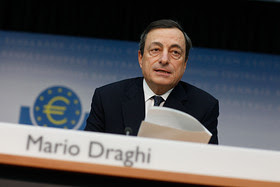 Ralph Orlowski/Getty Images Enlarge Image
Mario Draghi, president of the European Central Bank.
The Bank of England stuck with its target for quantitative easing, while the Bank of Japan dismissed calls that it begin asset purchases. See: ECB policy unchanged; Draghi faces Italy questions.
The Labor Department said initial applications for unemployment benefits unexpected declined by 7,000 to 340,000 last week, with the six-week average falling to its lowest level since March 2008. See: U.S. jobless claims fall to 340,000,
The better-than-expected illustration of an improving labor market comes a day ahead of the government’s monthly jobs report, with the unemployment rate at 7.9% in January.

Another Labor Department report on Thursday had the productivity of American workers dropping in the fourth quarter as companies hired more and increased hours. See: U.S. fourth-quarter productivity falls 1.9%.
And Commerce Department data had the trade deficit widening in January on increased demand for imported crude. See: U.S. trade gap widens in January.
Kate Gibson is a reporter for MarketWatch, based in New York.

DealBook P.M. Edition March 7, 2013.: Deal Professor: For Icahn, a Game of Chicken With Dell's Board