The infamy of Internet scammers' license. We can stop this fraude by Fernando Guzmán Cavero February 24, 2013:

The infamy of Internet scammers'  license.  We can  stop this fraude  by Fernando Guzmán Cavero February 24, 2013:


WARNING
I have been receiving  with certain frequency, that exceed  my limit of tolerance this scam that says: Full name of the   "commented on a photo thaphoto shown below.

[SPAM] Willy Claudio Linares commented on a photo that you're tagged in.

Email ThisBlogThis!Share to TwitterShare to FacebookShare to Pinterest
Labels: 2013:, The infamy of Internet scammers' license. We can stop this fraude by Fernando Guzmán Cavero February 24

» China's defence ministry rejected a report linking it to the increase in hacking of American companies. The report, published by Mandiant, an American cyber-security firm, found that a group of hackers linked to the Chinese army is probably one of the world's "most prolific cyber-espionage groups". The defence ministry retorted that the study lacks "technical proof". See article»
» Nearly 90 people were killed and more than 160 injured in a bombing in the city of Quetta, in western Pakistan. Lashkar-e-Jhangvi, a Sunni militant group, claimed responsibility for the blast, which targeted an area populated by Shia Muslims. For three days, the relatives of those killed refused to bury their dead, a protest against authorities they said were turning a blind eye against anti-Shia violence.
» The UN reported that the number of civilian casualties in Afghanistan fell in 2012 for the first time in six years. It documented 2,754 civilian deaths last year, 12% fewer than in 2011. The drop in casualties was attributed to less fighting on the ground and a decline in suicide attacks as well as NATO air operations. But the report also expressed concern about the re-emergence of armed groups, particularly in the country's north.
» Japan's monthly trade deficit hit a record in January as its currency weakened. However, exports rose for the first time in eight months, as the weak yen made Japanese goods more affordable to foreign buyers.
Sequester gesture
» Barack Obama increased pressure on the Republicans to cut a deal on the "sequester", which will slash spending from March 1st. Meanwhile Alan Simpson and Erskine Bowles, who oversaw a commission looking at ways to reduce the deficit but whose efforts were largely ignored by Mr Obama, launched a rehash of their plan. Congressmen return from a recess next week. See article»
» When they return senators will vote again on Chuck Hagel's nomination as defence secretary. Some Republicans have used filibustering tactics to prevent a vote.
A turning point for Tunisia?

» Hamadi Jebali, a member of Tunisia's Islamist Nahda party, resigned as prime minister, following ructions after the assassination earlier this month of an opposition leader. Nahda itself was divided over whether it should continue to dominate a new government or share power more widely with secular parties and technocrats in the run-up to an election expected in the summer.
» In Israel, Tzipi Livni, a former foreign minister and opposition leader who puts peace with the Palestinians at the top of her agenda, agreed to join a coalition led by the prime minister, Binyamin Netanyahu. He has until mid-March to form a new government. Ms Livni will be justice minister and chief negotiator with the Palestinians.
» Saudi Arabia's King Abdullah swore in 30 women to the kingdom's previously all-male 150-member Shura Council, the country's senior advisory body. Conservative clerics have criticised the move.
» Robert Mugabe, Zimbabwe's ageing president, called a referendum for March 16th to endorse a new constitution that has been agreed on by all the main parties. This should pave the way to general and presidential elections within a few months. See article» 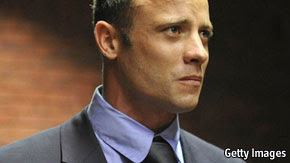 » Mamphela Ramphele, a former senior World Bank official and anti-apartheid activist, launched a new political party in South Africa called Agang. She said it would compete against the ruling African National Congress in the next elections in 2014. Its chances of making an impression were not rated highly. See article»
» An initial hearing of the murder charges laid against Oscar Pistorius for killing his girlfriend enthralled much of the world. The South African Olympic and Paralympic runner claims he shot Reeva Steenkamp in his bathroom thinking she was a burglar. The twists in the case took an even more surprising turn when it emerged that the lead detective is himself being investigated for attempted murder.
Patient confidentiality
» After more than two months in a Cuban clinic, Hugo Chávez, Venezuela's ailing president, was officially said to have returned home, to a military hospital in Caracas. The government earlier released a photograph of the president lying in bed, and said he was unable to talk because of a breathing tube in his throat. See article»
» Rafael Correa, Ecuador's left-wing president, was easily re-elected for a new four-year term, with 57% of the vote. His party also won a big majority in the National Assembly. See article»
» Yoani Sánchez, a Cuban blogger, was allowed to leave the island for an 80-day foreign tour, the result of the recent abolition of exit controls under which she had been denied permission to travel for five years.
Forced exit
» Boyko Borisov, Bulgaria's prime minister, announced the resignation of his government after thousands of people took to the streets to protest against high electricity prices and austerity measures. Mr Borisov had sacked his finance minister and proposed a reduction of electricity prices, but the protests continued. See article»
» Serzh Sargsyan won a new five-year term as president of Armenia in an election marred by allegations of fraud and the lack of a serious challenger. The opposition Heritage party claimed many ballots had been thrown away, but did not say whether it would challenge the result.
» A presidential election in Cyprus will go to a second round on February 24th. Nicos Anastasiades, the front-runner, who is pushing for a bail-out from the European Union, is expected to win after taking 45% of the vote in the first round. See article» 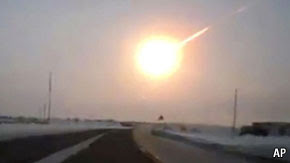 » A court in Moscow postponed a pre-trial hearing to March in a posthumous case against Sergei Magnitsky, a Russian lawyer who died in prison in suspicious circumstances. Mr Magnitsky had been arrested after accusing officials of tax fraud, but was himself accused of those crimes. His death led to a diplomatic row between Russia and America.
» A 10,000-tonne meteor disintegrated over Chelyabinsk, a city in Russia near the border with Kazakhstan. Its break-up released 500 kilotonnes of energy, equivalent to the yield of a large nuclear bomb, blowing out windows and injuring more than 1,000 people. See article»
at February 24, 2013 No comments: Links to this post

The Economist | Business this week: Highlights of news coverage from February 16th - 22nd 2013.

» The release of the minutes from recent meetings of the policy committees at the Federal Reserve and the Bank of England revealed tensions about quantitative easing. The Fed's meeting worried about whether bond-buying and easy money would lead to greater risk-taking in the market. But at the Bank of England Sir Mervyn King, the retiring governor, joined two colleagues in urging more asset purchases; they were voted down. Stockmarkets fell and the pound tumbled. See article» 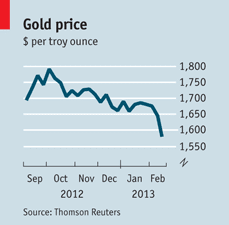 » Gold prices hit six-month lows. One explanation as to why the shine has come off the precious metal is that stockmarkets are more stable than at the height of the euro-zone crisis, so investors are less tempted by gold as a haven. See article»
» The European Commission issued its proposal for a new financial-transactions tax on shares, bonds and derivatives. The FTT would be applied in 11 countries, including France and Germany. It could also be levied on transactions carried out in other countries, creating a headache over jurisdiction. Critics gripe that the tax is much higher than anticipated and will hurt economic growth. That worry might lead to a revision of the FTT in the months ahead. See article»
» Transatlantic differences over bankers' pay became clearer. In Europe politicians debated a European Parliament proposal to cap bonuses. Meanwhile, it emerged that Brian Moynihan, the boss of Bank of America, is to see his compensation package increase by 70%, to around $12m. A big chunk of that reflects his performance: BofA's share price rose by 109% last year. See article»
Making carbon costlier

» The European Parliament's environment committee decided to postpone an auction of 900m permits to emit carbon dioxide, which were to have been sold via the emissions-trading system, a cornerstone of European climate-change policy. Weak demand has led to a glut of permits, the price of which has fallen from €20 ($27) a tonne in 2011 to below €5, thus damping the incentive for firms to curb emissions. By cutting the supply of new permits, the EU aims to pep up the price. See article»
» Yet another big mining firm changed its chief executive. BHP Billiton announced that Marius Kloppers would step down in May and be replaced by Andrew Mackenzie, who heads BHP's non-ferrous metals division. Mining companies are retrenching after years of ambitious projects. BHP's half-year net profit fell by 58%. See article»
» The FBI and the Securities and Exchange Commission began separate investigations into possible insider trading ahead of the announcement by Heinz on February 14th that it is being bought for $28 billion by a consortium led by Warren Buffett and a private-equity firm. It is the largest ever acquisition of a firm that makes food and nothing else. See article»
» Nestlé withdrew some beef pasta dishes from the shelves of shops in France, Italy and Spain after finding traces of horse DNA in them. The Swiss food giant is the latest company to be hit by the horsemeat scandal that is galloping across Europe, raising questions about the long tail of meat-supply chains. See article»
Paper chains
» The world of stationery was anything but stationary this week, as Office Depot and OfficeMax agreed to merge. The two retailers are smaller rivals to Staples. All have seen challenges arise to their business not only from Amazon but also from the spread of hand-held devices that contain calendars, diaries, notebooks and so on. Rumours persist that Staples is considering going private in a buy-out.
» Dell reported a 31% drop in profit for its most recent quarter, as its sales of PCs, which account for half its revenues, fell by 20% compared with the same period a year earlier. The company has accepted an offer to take it private from its founder, Michael Dell, though its biggest outside investors think the price is too cheap.
A game changer
» Sony unveiled the PlayStation 4, beating Microsoft in launching a product that heralds the next generation of game consoles. Sony's device connects better with smartphones and tablets. See article»
» The New York Times Company put the Boston Globe up for sale again. It tried to sell the newspaper in 2009 but withdrew the offer after unions agreed to a cost-cutting strategy. The publisher is focusing on turning the New York Times into a global news hub.
» Twelve more billionaires signed the Giving Pledge, which was started in 2010 by Bill Gates and Warren Buffett to persuade rich people to give at least half their money to charity before they die. The twelve include the first non-Americans, such as Sir Richard Branson, Mo Ibrahim, Victor Pinchuk, Vladimir Potanin and David Sainsbury. See article»
at February 24, 2013 No comments: Links to this post

Email ThisBlogThis!Share to TwitterShare to FacebookShare to Pinterest
Labels: The Economist | Business this week: Highlights of news coverage from February 16th - 22nd 2013.