“If the Fed is talking about ending its asset-purchase program, it’s because they view the economic landscape as better,” said Dan Greenhaus, chief global strategist at BTIG LLC.

But some correction from an extended rally that has the S&P 500 index SPX -1.24%  up 6% so far this year “is hardly the worst idea, especially in front of the coming sequester and budget debate,” he added.

The market’s rise has come along with the Fed’s easing policy, better-than-anticipated earnings and a short-term U.S. fiscal deal reached in early January.

Minutes from the Federal Open Market Committee’s January meeting released Wednesday had some Fed members expressing concern about the $85 billion a month in asset purchases. Read: Uneasy about QE, Fed plans debate on program.
“As we found out last month, we don’t have a uniform voice coming from the Fed,” said Art Hogan, market strategist at Lazard Capital Markets.

Interest rates could remain exceptionally low “well into 2014, but how much we spend on purchases could be scaled back at any time,” said Hogan of the Fed’s monthly spending on assets.

However, potential changes to the Fed’s monetary policy are “less bothersome than some things on the horizon,” said Hogan, listing the March 1 deadline for massive cuts in government spending, known as sequestration, and the outcome of upcoming Italian elections. 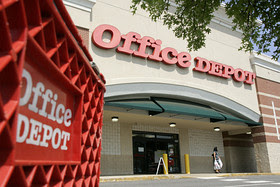 Gold prices fell 1.6% to end below $1,600 an ounce, pressured by the FOMC minutes and strength in the dollar. Read: Gold sinks below $1,600 amid death-cross talk.
Among individual stock moves, Boeing Co. BA +0.17%  rose 0.2% a day after engineers approved the plane maker’s contract offer, deflating a labor dispute.

“Weakness in gold and Apple has been the norm of late, but when you throw in the home builders and a couple of suppliers into the mix, you get a broad decline,” said Elliot Spar, market strategist at Stifel Nicolaus & Company Inc.

Why is gold slumping again?
The price of gold, which touched $1,750 an ounce in December, is now around $1,600 - and falling. Polya Lesova joins Markets Hub.


For every stock on the rise more than three fell on the New York Stock Exchange, where 816 million shares traded.

Figures from the Commerce Department had builders breaking ground in January on the most homes in more than four years and permits for construction ahead climbing. Housing starts fell to a 890,000 rate, below expectations. See: Housing starts slump as apartment building slows.
The rise in permits suggests “the January decline in starts will be temporary, and as the year progresses, housing starts will continue to push higher,” said Dan Greenhaus, chief global strategist at BTIG LLC.
A separate report from the Labor Department had the producer-price index rising 0.2% in January after a 0.3% decline the month before. See: More expensive vegetables push up producer prices.
Office Depot Inc. ODP -16.73%  and OfficeMax Inc. OMX -7.00% OMX -7.00%  will join in a $1.2 billion all-stock deal, the companies said Wednesday, confirming an accord mistakenly announced ahead of its completion. See: Office Depot, OfficeMax staple fortunes together.
Kate Gibson is a reporter for MarketWatch, based in New York. Follow her on Twitter @MWKateGibson. The government had announced the impending closure of the Kitsilano Coast Guard station last year in an effort to ... READ MORE

The number of Canadians who expect to retire at age 65 has decreased by almost... READ MORE

Two downtown sites could be Target for U.S. retailers

Retail and real estate analysts believe large retailers such as Wal-Mart or Target could start pushing for construction of a ... READ MORE

Along with many of her cabinet heavyweights and MLAs, Premier Christy Clark recently made an announcement that ... READ MORE

NYT Opinion Today February 20, 2013.: The Conscience of a Liberal: Fine Austrian Whines by Paul Krugman Something Wiki this way comes

By Sara Sjolin, MarketWatch
LONDON (MarketWatch) — European stock markets were mostly lower Wednesday, with weaker-than-expected euro-zone consumer-confidence data beating the air out of a risk-on sentiment, while investors also stayed cautious ahead of minutes from the U.S. Federal Reserve.


Can China create its own Silicon Valley?
Duncan Clark of BDA China talks about the changing business environment for Chinese technology companies.


“This week we have the Italian election over the weekend, and I think there’s 30%-40% chance of a market-unfriendly outcome. That would be bad for the euro and bad for Italian bonds. I think it would be very wise to keep risk low over the weekend,” said Nick Beecroft, senior market analyst at Saxo Capital Markets in London. See: Will Berlusconi win over Italians with Champions League glory?