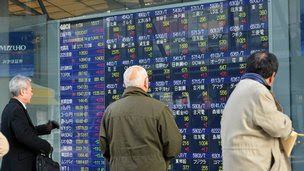 Japanese shares rise after finance ministers of the G20 group of nations avoid singling out Japan for criticism over the recent yen weakness.

Germany demands explanations from the online retailer Amazon after a documentary showed seasonal workers being harassed by security guards.

Thailand's economic growth exceeds expectations in the last three months of 2012 as it continues to recover from the previous year's devastating floods.
at February 17, 2013 No comments: Links to this post