The Economist | Business this week: Highlights of news coverage from Feruary 9th - 15th 2013.

» Barclays laid out a course for its business that tries to put the LIBOR rate-rigging scandal and other fiascos behind it. Antony Jenkins, who took over as chief executive after the resignation of Bob Diamond, pledged that the bank would "help shape the new era for banking" by focusing on stable growth and ethically sound investments. His strategic review also cuts 3,700 jobs, half of them in investment banking, although Barclays remains committed to its wholesale activities. See article».
Broadcast news

» Comcast, one of America's biggest providers of telecoms and cable-television services, said it was buying the 49% stake in NBC Universal it does not already own, for $16.7 billion. It is acquiring the stake from General Electric. The transaction comes amid a flurry of dealmaking in the technology, media and telecoms market, which is seeing its busiest start to a year since the dotcom boom of 2000.
» The two biggest outside investors in Dell warned that they would fight its proposal to go private, arguing that it undervalues the company. The buy-out consortium offered $13.65 a share to shareholders when it presented its deal, but Dell's share price on the stockmarket has since risen above the offer price.
» Apple also faced a potential rift with shareholders when David Einhorn, an activist investor, launched a lawsuit aimed at "unlocking shareholder value". Tim Cook, Apple's boss, denied Mr Einhorn's charge that Apple has a "mentality of the Depression" era about hoarding cash.
» The OECD, a rich-country club, said that greater international co-ordination will be needed to stop multinational companies shifting profits among jurisdictions in order to pay the lowest possible tax rate. In a report the OECD found that the practice is becoming more widespread. Starbucks recently found itself in hot water over its tax affairs in Britain. See article». 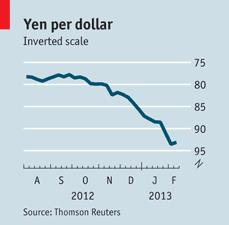 » The G7 issued a statement intended to soothe concerns about a "currency war" but ended up causing more confusion than clarity. The statement chided government intervention in currency markets, but also appeared to support an effort by Japan to combat deflation. The yen has weakened markedly against the dollar in response to the new Japanese government's attempt to revive the economy. See article».
» Japan's GDP shrank by 0.4% at an annual rate in the last three months of 2012, the third straight quarter of decline. The economy was weighed down by sagging exports, giving fuel to the government's argument that it needed to take action to tackle the high yen.
» Regulators in America gave the go ahead for CNOOC, a Chinese state-owned oil company, to take over Nexen, which operates mainly in Canada's oil sands but has assets elsewhere, including America's Gulf coast. It was the last big regulatory hurdle for the $15.1 billion deal, the biggest-ever foreign acquisition by a Chinese firm. See article».
» Rio Tinto reported an annual net loss of $3 billion, its first in two decades. This was because of a write-down of its aluminium assets and a project in Mozambique. The mining company's underlying profit was $9.3 billion.
Ready for take-off
» American Airlines and US Airways announced that they were merging, the last of the big American carriers to do so. The deal creates one of the world's biggest airlines.
» Giuseppe Orsi, the boss of Finmeccanica, an Italian defence company, was arrested by police investigating whether bribery was involved in securing a government contract in India to supply helicopters. The bribes were allegedly paid when Mr Orsi headed AgustaWestland, a subsidiary of Finmeccanica.
» PSA Peugeot Citroën reported a €5 billion ($6.4 billion) annual net loss, a record for the company. The French carmaker's sales in the depressed European market slumped by 15% last year. See article».
Alternative energy supply
» General Electric became the world's biggest manufacturer of wind turbines in 2012, according to BTM Consult, which researches green firms. Vestas, a Danish company, had held the top spot since 2000. It has struggled recently, partly because the European push for wind power has been curtailed by the debt crisis. GE, on the other hand, benefited from a gust of activity in America to install turbines ahead of the expiration of a tax break (which was extended).
» Amazon is the most reputable company in America, according to an annual survey conducted by Harris Interactive. The online retailer just pipped Apple to the number-one slot. Walt Disney, Google and Johnson & Johnson completed the top five. The bottom five were AIG, Goldman Sachs, Halliburton, American Airlines and Bank of America.
at February 16, 2013 No comments: Links to this post

Email ThisBlogThis!Share to TwitterShare to FacebookShare to Pinterest
Labels: The Economist | Business this week: Highlights of news coverage from Feruary 9th - 15th 2013.

» Pope Benedict XVI stunned the Catholic church by announcing that he would step down on February 28th, the first papal resignation in 600 years. In a statement read out in Latin, the 85-year-old pontiff said he had decided to leave office because of his age and because "strength of mind and body are necessary" for the job. He conducted his final public mass on Ash Wednesday. The list of favourites to succeed him includes cardinals from Austria, Brazil, Ghana, Italy and the Philippines. See article»
» The economies of Germany and France contracted in the fourth quarter of 2012 as the euro zone moved deeper into recession. Germany's GDP shrank by 0.6%, its worst performance since 2009. The 0.3% contraction in France makes it less likely that it will reach its budget-deficit target this year. See article»
» A meeting of European Union leaders confounded the critics by agreeing on the first real-term cuts in spending since the EU's founding. The deal shaves €34.4 billion ($46 billion) off the budget over the next seven years, a cut of less than 1%. See article»

» France suggested that it wants to give new impetus to Turkey's application to join the EU, and would not block accession talks that have been stalled for three years. Under Nicolas Sarkozy's presidency, France was a stout opponent of Turkish entry. Turkey's eagerness to join has waned since the start of the euro-zone debt crisis.
» A bill that legalises gay marriage in France easily passed the National Assembly. It now heads to the Senate.
» One of the closest allies of Angela Merkel, the German chancellor, stepped down as Germany's education secretary. Annette Schavan had been stripped of her doctoral degree following a plagiarism scandal. The ruckus was a distraction for the ruling Christian Democrats as they focus on an election later this year.
» Italy's former head of intelligence was sentenced to ten years in prison for his part in the 2003 rendition to Egypt of a Muslim cleric, who claims he was tortured. The rendition was conducted under the auspices of the CIA. Italian courts have sentenced 22 CIA agents in absentia.
Nervous neighbours 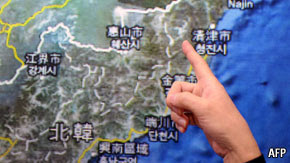 » North Korea carried out its third test of a nuclear bomb, bringing condemnation from around the world. It said the test was in response to America's "reckless hostility". Barack Obama warned this would only isolate North Korea further. The UN Security Council called it a clear threat to international security. See article»
» In India a Kashmiri militant was hanged after his final plea for clemency was rejected. Afzal Guru was sentenced to death for helping to plot a deadly assault by militants on India's Parliament in 2001. He had been on death row since 2002, but had denied plotting the attack. See article»
» Demonstrations grew in Dhaka, the capital of Bangladesh, over a ruling by the country's war-crimes tribunal. A leader of the Jamaat-e-Islami party was convicted of mass murder during the country's 1971 war of independence with Pakistan and was given a life sentence. Many of the protesters want him executed. See article»
» Thailand 's army killed 16 militants who had stormed a base near the border with Malaysia. More than 5,000 people have been killed in Thailand's Muslim-majority south since a separatist campaign reignited in 2004.
» Mohamed Nasheed, a former president of the Maldives, took refuge in the Indian high commission in Male, the capital. He was the first democratically elected president of the archipelago country but left office in February 2012 claiming the threat of a coup had forced him out.
Diplomatic moves
» The Syrian National Coalition announced that Qatar will hand it control of the Syrian embassy in Doha, the capital. The Syrian opposition has already appointed an ambassador. Qatar was one of the first governments to recognise the group as the official representative of the Syrian people.
» The Congress for the Republic, the secular party of Tunisia's president, Moncef Marzouki, said that it would stay in the ruling Islamist-led coalition for another week in the hope that talks aimed at defusing the country's political crisis will succeed.
» Millions of Kenyans watched their country's first presidential debate, broadcast live on 42 local radio and television stations, as well as on YouTube. All eight candidates standing in next month's election took part.
Much depreciated
» Venezuela devalued its currency by 32% against the dollar, in a bid to reduce the fiscal deficit and help exporters. The bolívar has been devalued several times since Hugo Chávez became president in 1999. The official exchange rate still rates the dollar far lower than its price on the black market. See article»
» The Jamaican government said it would restructure its sovereign debt. Jamaica completed one bond swap in 2010, but its debt-to-GDP ratio remains a crushing 140%. Creditors who participate are expected to receive much lower interest rates than they do now.
Among friends (and enemies) 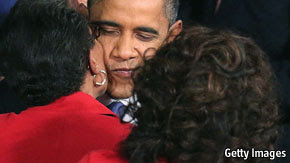 » Barack Obama gave the American president's annual state-of-the-union message to Congress. He laid out a surprisingly full agenda that continued his recent theme of pushing progressive policies, such as proposing to raise the minimum wage to its highest level for 34 years (in real terms). See article»
» Mr Obama also announced that the United States and the European Union would begin talks to create a transatlantic free-trade zone. The idea is not new but has gained support from senior politicians on both sides of the Atlantic in recent months. The talks are expected to last two years.
» The Republicans' official response to Mr Obama's speech was given by Marco Rubio, a Cuban-American senator, underlining the party's warming to immigration reform. However, John Boehner, the Republican Speaker in the House, said a bill needn't be rushed and he would prefer "a little foreplay" first. See article»
» The International Olympic Committee dropped wrestling from its list of core sports for the 2020 games. Wrestling has been on the programme since the first modern games in 1896 and is a popular college sport in America. The IOC grappled with its decision, but says wrestling can reapply as an "additional" sport.
at February 16, 2013 No comments: Links to this post

Alert Name: FGC BOLSA- FGC FIN February 16, 2013 Compiled: 12:27 AM
In Chicago, Policy Speech by Obama Turns Personal
By JACKIE CALMES (NYT)
In Chicago on Friday, President Obama will outline an initiative to select 20 communities as laboratories for better coordination of federal, local, nonprofit and private-sector investments.
U.S. Manufacturing Weakens, but May Rebound Quickly
By REUTERS (NYT)
The Federal Reserve said manufacturing output declined 0.04 percent in January, but a similar report from the New York Fed indicated the drop-off could be temporary.
Incomes Flat in Recovery, but Not for the 1%
By ANNIE LOWREY (NYT)
New data show uneven benefits from the economic recovery of 2010-11, with a big rise for the highest earners and little change for others.
In World Trade Data, Signs of a Slowdown
By FLOYD NORRIS (NYT)
China, with an 8 percent gain, posted faster growth in exports than the United States. Canada reported a small gain, but other countries showed declines.
More Articles On This Topic »
at February 16, 2013 No comments: Links to this post