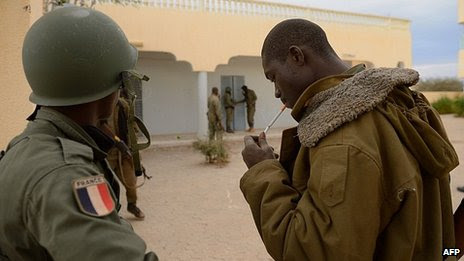 French-led troops are consolidating their position in the historic Malian city of Timbuktu after seizing it from Islamist extremists.
French military commanders say soldiers are patrolling the streets looking to flush out any remaining militants.
Once Timbuktu is secured, troops are expected to focus on the last rebel stronghold, Kidal.
Meanwhile, an international donors' conference is due to open in the Ethiopian capital, Addis Ababa.
The African Union, which has just ended a summit in the city, hopes the conference will raise funds for a multinational force to fight the rebels.
The cost of the military operation has been estimated at up to $1bn (£635bn).

Thomas Fessy BBC News, Timbuktu
Residents were still cheering French and Malian troops when we entered the city late in the afternoon.
Both national flags can be seen all over town. The feeling that people are coming back to life after nearly a year of occupation by extremist militants is simply incredible.
There are still some reminders of the Islamist rule with banners declaring Sharia here and there.
But we have also seen people looting houses allegedly held by al-Qaeda militants. A young man was walking with a huge wooden door on his back while others fought for iron sheets and all sorts of lamps and cables.
A French commander said troops were still sweeping the town for mines, booby traps and more importantly for potential militants hiding within the population.
There is no electricity here nor phone network. The two main hotels, which have been closed for so long, have reopened to accommodate incoming journalists. Staff are delighted to welcome us and are moving heaven and earth to resume normal service.

Also on Tuesday, a conference in Brussels is due to decide on troops for an EU military training mission for Mali. The UK has already said it will contribute to the mission.
Earlier on Monday, about 1,000 French soldiers - including paratroopers - and 200 Malian troops seized Timbuktu airport and entered the city without a shot being fired.
Col Thierry Burkhard, chief military spokesman in Paris, said that although French troops spearheaded the offensive, Malian forces were on the streets of the city.
"There was an operation on Timbuktu last night that allowed us to control access to the town," he said on Monday.
"It's up to Malian forces to retake the town."
As they withdrew into the desert, the Islamist fighters set fire to several buildings including a library containing priceless manuscripts, some dating back to the 13th Century.
The Ahmed Baba institute held about 30,000 manuscripts and includes documents about centuries of life in the city, Mali and neighbouring countries.
The recovery of Timbuktu followed the swift capture by French and Malian forces of Gao on Saturday, another major northern population centre occupied by militant groups.
Islamists took advantage of a coup last year to seize the vast north of Mali and impose strict Sharia law on its inhabitants.
France - the former colonial power in Mali - launched a military operation earlier this month after militants looked to be threatening the south.
Meanwhile, reports from Kidal - home of the head of Ansar Dine, the main militant group in northern Mali - suggest that the group may have already lost control there. 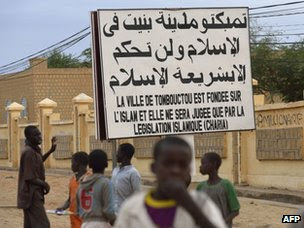 Signs proclaiming Sharia law are a testament to the militants' period of control
The secular Tuareg rebel group MNLA said it had taken charge. The Agence France-Presse news agency quoted a spokesman of an Ansar Dine breakaway faction as saying that it was jointly "ensuring security" with the MNLA.
The BBC's Thomas Fessy in Timbuktu says that once Kidal is taken, the first phase of the French operation will be over.
The second phase will be to track down the militants to their desert hideouts, he adds.
Mali dominated an African Union summit which ended on Monday in Addis Ababa, with the bloc deciding to contribute $50m (£32m) to the multinational force.
An AU official said 60 to 70 donors had been invited to the international donors' conference, which has been organised at short notice.
Our correspondent says there is some unease in Africa that the continent appears unable to pay for its own peacekeeping operations.
Addressing the AU summit, UN Secretary-General Ban Ki-moon said the Malian government should look beyond the current conflict if it wanted peace in the country.
"I'm urging the Malian authorities to engage in inclusive dialogue, to have a political process going on and to have national reconciliations through dialogue, so that they can have constitutional order restored, they can have a political solution, economic stability insured," he said.

More on This Story 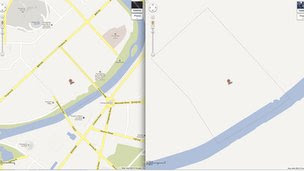 Google publishes mapping information on North Korea, a country that has so far been mostly blank on the popular website Google Maps.

Japan opens the door for increased imports of beef from the US, as it eases restrictions that have been in place for almost a decade.

Japanese carmaker Toyota regains its slot as the world's biggest vehicle maker, capping a year of a dramatic turnaround in its fortunes.

Financial writer Jeff Thomas today shows that central bank gold swaps and leases and the massive naked short position they underwrite are starting to get figured out. Thomas' commentary is headlined "The Disappearing Gold" and it's posted at International Man's Internet site here:
http://www.internationalman.com/global-perspectives/the-disappearing-gol...

Interviewed today by the German financial journalist Lars Schall, former Federal Reserve and Treasury Department official Edwin M. Truman seems to back away from his assertion to a World Bank and Bank for International Settlements conference last month (http://www.gata.org/node/12084) that the Washington Agreement on Gold was "the modern counterpart" of the gold price-rigging London Gold Pool of the 1960s. But Truman extends his call for greater transparency in central banking to encompass the gold swaps and leases that, according to a March 1999 report of the International Monetary Fund (http://www.gata.org/node/12016), are kept secret to facilitate secret intervention in the gold market.

The interview with Truman is posted at Schall's Internet site here:
http://www.larsschall.com/2013/01/28/is-the-washington-agreement-on-gold...

If you own non-voting shares in Telus, lucky you. They are expected to increase in value when they are converted to ... READ MORE

Mining in Canada’s north to double by decade’s end: report

Mining employment and output in Canada’s north will double by decade’s end, according to ... READ MORE

The Portside Pub, the latest venture by Save On Meats entrepreneur Mark Brand, opens today in ... READ MORE

Three hundred digital media students, pros get their game on