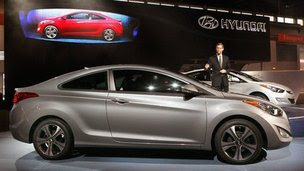 Kia's design boss Peter Schreyer has been named as the new head designer for the wider Hyundai Motor Group.

Carmaker Jaguar Land Rover is set to announce the creation of new jobs at its plant in Solihull in the West Midlands of England.

US regulators order a review of the 787 Dreamliner after a series of incidents put a question mark over the safety of Boeing's flagship plane.

Also in the News

Heads may roll at RBS over Libor

Britain's Office for National Statistics has decided, when it comes to tracking the inflation rate, it's better to be consistent than to be right.
Read full article

Posted by Fernando Guzmán Cavero at January 13, 2013 No comments:

Court in Egypt orders retrial for Mubarak after appeal 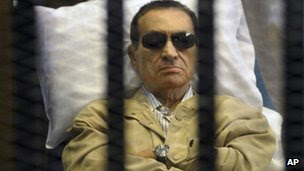 A court in Egypt has ordered a retrial for ex-President Hosni Mubarak after accepting an appeal against his life sentence over the deaths of protesters.
Mubarak, 84, was overthrown in 2011 after mass street protests in the capital Cairo and other cities, and jailed in June.
Ex-Interior Minister Habib al-Adly will also be retried on the same charge.
Mubarak, who remains in custody, will also be retried on corruption charges for which he was acquitted in June.
He led Egypt for almost 30 years, surviving six assassination attempts, before the revolt against his rule.
Mohammed Morsi of the Muslim Brotherhood was elected president in June.
'Same evidence' Judge Ahmed Ali Abdel Rahman announced: "The court has ruled to accept the appeal filed by the defendants... and orders a retrial."
Mohamed Abdel Razek, one of Mubarak's lawyers, told Reuters news agency the retrial would be based on the same evidence used in the previous trial. 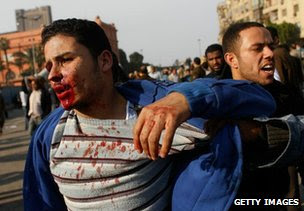 of protesters w Hundreds ere hurt during the revolt against Mubarak's rule
"No new evidence will be added to the case," he said.
At the request of prosecutors, Judge Abdel Rahman also overturned the acquittal of Mubarak, his sons Gamal and Alaa, and fugitive businessman Hussein Salem on corruption charges.
A new panel of judges could consider the former leader's health when issuing their verdict, Mubarak's lawyer added.

Since Mubarak was jailed in Cairo, there have been frequent reports about his ill-health.
He is currently in a military hospital after hurting himself in a fall in his prison bathroom last month.
On Saturday, the former leader was reportedly questioned over gifts worth millions of Egyptian pounds which he allegedly received from the country's flagship state newspaper, Al-Ahram.
He was ordered detained for 15 days pending the investigation, a judicial source told AFP.
'We love you'
Sunday's ruling was met with cries of "Long live justice!" by Mubarak supporters who held up his picture and hugged each other in the courtroom while dozens more outside shouted "We love you, president!", AFP news agency reports.
On 2 June, following a 10-month trial, Mubarak and Adly were convicted of conspiring in the killing of protesters.

The two men had faced possible death sentences over the killing of 850 protesters.
Families of victims were disappointed that Mubarak had not been convicted of ordering the killings, the BBC's Aleem Maqbool reports from Cairo.
There was also dismay among some that he had not been tried for abuses allegedly committed earlier in his rule.

At the same trial in June, Mubarak was acquitted of corruption.
Posted by Fernando Guzmán Cavero at January 13, 2013 No comments:


Posted by Fernando Guzmán Cavero at January 13, 2013 No comments:

Alert Name: FGC BOLSA- FGC FIN
January 13, 2013 Compiled: 12:33 AM
The Low Politics of Economic Growth
By ANNIE LOWREY (NYT)
What if it is the weak economy that is driving the fiscal failures in Washington?
America’s Productivity Climbs, but Wages Stagnate
By STEVEN GREENHOUSE (NYT)
The debt-ceiling debate is unlikely to alter one major factor contributing to income inequality: stagnant wages.
Washington’s Economic Boom, Financed by You
By ANNIE LOWREY (NYT)
Over the last decade, the nation’s capital has been the great American boomtown, courtesy of the U.S. taxpayer. What happens when the government money dries up?
Should We Tax People for Being Annoying?
By ADAM DAVIDSON (NYT)
A bipartisan club of economists might have a way to solve traffic jams. (And to get your neighbor to pick up after the dog.)
Mutual Funds Found Big 2012 Gains, Despite Political Worry
By CONRAD DE AENLLE (NYT)
Mutual fund investors managed to find strong gains in 2012, even as political and economic uncertainties swirled around them.
How Boehner Could Find Blue Sky, Above the Debt Ceiling
By RICHARD H. THALER (NYT)
By making one daring proposal, John Boehner, the House speaker, could have himself re-invited to the negotiating table for the nation’s economic future.
More Articles On This Topic »
Posted by Fernando Guzmán Cavero at January 13, 2013 No comments: