Future - The gold owner's guide to 2013
by Michael J. Kosares


By the time we get to the end of 2013, we will forget much of what shaped 2012. Yet, as we look back at 2012, there are some fundamentally disheartening, if not disturbing, trends that are likely to play a determining role in all financial markets for some time to come, including the gold market.

– The first is the inability of the political sector to deal with the “economic problem” on a global basis. From Jinping’s Beijing flowing west to Putin’s Moscow, from Merkel’s Berlin to Hollande’s Paris, from Cameron’s London to Obama’s D.C. and finally Abe’s Tokyo, the world’s great nation- states are locked in a web of acute and alarming political disarray. The question is no longer whether or not stability can be achieved. It is to what degree the instability can be restrained – a circumstance not unfamiliar to the student of history, but one for which the modern investor is generally unprepared and lacking in defenses.

- The second is the global predisposition to print money. Compliments of the disastrous events following the 2008 financial meltdown, vote-buying politicians globally have defeated usually conservative central bankers in the battle of the printing press. Ben Bernanke’s stewardship of the Federal Reserve has not only been emblematic of the trend, it has served as a bad example and dangerous precedent for other central bankers. You cannot slide a sheet of paper between the monetary policies of Ben Bernanke, Mario Draghi and Mervyn King (soon to be replaced with the even more dovish Mark Carney). Shinzo Abe, who was just elected Japan’s prime minister, has threatened to nationalize the Bank of Japan if it refuses to print money. It is as if John Law were reincarnated simultaneously in every major nation-state in the world.

- The third comes to us via Raoul Pal, the highly-regarded hedge fund manager who once co-managed one of the world’s largest hedge fund groups, GLG Global Macro Fund in London. It has to do with the persistent nature of the debt crisis that began in 2007 and never really went away. Pal outlined the problem at a seminar in Shanghai this past summer for other hedge fund managers — a presentation ZeroHedge called one of the “scariest ever.” In it he predicted a cascading sovereign debt collapse and default that would begin in Europe, jump the Channel to London, then move progressively through Japan, South Korea and even China. Finally, it would envelope the United States. The problem, he says, is that $70 trillion in G-10 sovereign debt is collateral for $700 trillion in derivatives.

“You have to understand,” he explains, “that a global banking collapse and massive defaults would bring about the biggest economic shock the world has ever seen. There would be no trade finance, no shipping finance, no finance for farmers, no leasing, no bond market, no nothing. The markets are at the frankly terrifying point of realizing that LTRO (long term financing operations), EFSF (European Finance Stability Facility) and QE (quantitative easing) etc. are not going to prevent this collapse.”
(Note: A synopsis of Mr. Pal’s seminar was the most popular post for 2012, and all-time, at the widely-read ZeroHedge website. Recommended.)

I do not know if Raoul Pal is correct. I don’t know if he’s even close. I can tell you that he was successful enough as a hedge fund manager to retire to Spain’s Valencia coast at 36 years of age and that he’s one of those guys like in the old commercial: When he speaks, people listen. I can also tell you that something is in the air — a sea change in investor psychology, of which we should take note. I pass this along as someone who has experienced several similar shifts in investor sentiment over the course of a forty-year career in the gold business.

In the last two months of 2012, we experienced volumes at USAGOLD not unlike those of 2008 and 2009 — and those were record volume years. The U.S. Mint confirmed our own experience by reporting that U.S. Gold Eagle sales in November and December hit their highest levels in two years. Also, demand for historic, pre-1933 gold coins surged — an important indicator because it tells us the safe-haven investor is back in the market. Since safe-haven investors tend to run ahead of the herd, this bodes well for gold demand as we move into 2013. Wholesalers tell us that the market for British sovereigns, Dutch 10 guilders, Swiss 20 francs, etc. is running very strong both in the United States and Europe. In particular, British sovereign supply has dried up. If I am reading the signs correctly (and I am big believer in letting the market speak for itself), 2013 could turn out to be a very good year for gold.

Michael J. Kosares, the editor of USAGOLD News, Commentary and Analysis, is the founder of USAGOLD and the author of "The ABCs of Gold Investing - How To Protect and Build Your Wealth With Gold."
﻿Jonathan Kosares graduated cum laude from the University of Notre Dame with a dual major in Finance and Computer Applications. He has been with USAGOLD since 2002, and currently holds the position of Executive Vice President of Sales and Marketing. He is the moderator of the USAGOLD RoundTable series, has authored numerous articles on the gold market and manages client activity for the high net worth division as well as the USAGOLD Trading and Storage Program.
Peter Grant spent the majority of his career as a global markets analyst. He began trading IMM currency futures at the Chicago Mercantile Exchange in the mid-1980's. Pete spent twelve years with S&P - MMS, where he became the Senior Managing FX Strategist. The financial press frequently reported his personal market insights, risk evaluations and forecasts. Prior to joining USAGOLD, Mr. Grant served as VP of Operations and Chief Metals Trader for a Denver-based investment management firm.
This newsletter is distributed with the understanding that it has been prepared for informational purposes only and the Publisher or Author is not engaged in rendering legal, accounting, financial or other professional services. The information in this newsletter is not intended to create, and receipt of it does not constitute a lawyer-client relationship, accountant-client relationship, or any other type of relationship. If legal or financial advice or other expert assistance is required, the services of a competent professional person should be sought. The Author disclaims all warranties and any personal liability, loss, or risk incurred as a consequence of the use and application, either directly or indirectly, of any information presented herein. Opinions expressed by contributors are strictly their own and publication here does not represent endorsement by USAGOLD.
Posted by Fernando Guzmán Cavero at January 07, 2013 No comments:

The U.S. Department of Labor today announced a $408,403 National Emergency Grant increment for continued assistance to about 320 workers affected by the 2011 closure of Evergreen Solar Inc. in Devens and Marlborough, Mass., and layoffs of two of its staffing firms.

The Daily Guru
The Fiscal Cliff and Your Retirement, Pete Kirtland

Ideas from Around the World
Dubai Feels Pinch of Iran Embargo, Tom Arnold

Today's Featured Videos & Exclusive Interviews
Investing in a Time of Financial Repression, Merryn Somerset-Webb
Be Your Own Fed, Mark Skousen
Posted by Fernando Guzmán Cavero at January 07, 2013 No comments:

White Collar Watch: Asking Hedge Funds to Turn Themselves In Peter J. Henning says that the government is weighing whether to require hedge funds to report any suspicious transactions, like insider information or manipulation of stock prices, a move hedge funds are likely to resist.
Posted by Fernando Guzmán Cavero at January 07, 2013 No comments:

NEW YORK (MarketWatch) — U.S. stocks fell on Monday, with the S&P 500 index retreating from a five-year high, as Wall Street looked to the next day’s start of the fourth-quarter earnings season.


With the threat of steep spending cuts and tax hikes averted, and the next showdown over the debt ceiling not likely to concern investors until February, Wall Street will shift its focus to results from American corporations.

“Earnings do matter, but what may be as important is the outlook for the first quarter,” said Jim Russell, chief equity strategist and regional investment director at U.S. Bank Wealth Management.
“The equities market is trying so hard to find the all-clear signal, but we think managements will indicate the quarter slowed from October through December, so a slow start to 2013,” he said.
“The fourth quarter could tend to be a bit bumpy this time around, with the outlook for the first quarter cautious because of the Washington situation,” said Russell of the coming showdown over raising the U.S. debt ceiling.

“We saw evidence of the intensity on the Sunday morning talk shows yesterday. Democrats are looking for additional revenue and Republicans are looking for spending cuts. We are going into this debate with some attitude on both sides,” Russell noted. 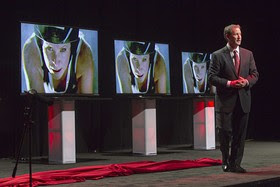 Reuters Enlarge Image
Sharp unveils new TV technology at the Consumer Electronics Show in Las Vegas Monday.
Intel Corp. INTC +0.43%  was one of the gainers in the Dow, its shares up 0.4% after Lazard Capital Markets upgraded the chip maker.

Walgreen Co. WAG +2.29%  added 2.3% after Jefferies Group Inc. raised its rating of the drugstore chain to buy from hold.

On Capitol Hill, Republicans are linking raising the U.S. debt ceiling to reduced spending on entitlement programs including Medicare. Congress has to move as soon as mid-February to keep the country out of default. See: Battle lines harden for new budget deal.

The CBOE volatility index VIX -0.29% , a gauge of investor uncertainty, had its biggest weekly drop ever, as fear over the fiscal cliff gave way to relief that a deal had been reached. See: Debt fight may mean ‘fear index’ rebound.
“The meteoric rise we’ve had in the last week is certainly not sustainable. We had a sizable can kicked down the road, and only kicked a couple of months out,” said Randy Frederick, managing director of trading and derivatives at Charles Schwab & Co. Inc.

“We’ve had so many distractions the last couple of earnings seasons. The unfortunate thing is I’m not sure earnings are going to be all that good,” said Frederick.

Still, “expectations have been lowered enough so that even though Q4 earnings will be mediocre at best,” the results should be priced into the market, said Frederick.

The cost to renovate BC Place Stadium ended up five times higher than the figure B.C. Pavilion Corp. originally estimated, it has emerged ... READ MORE

The American millionaire who bought a ghost town north of Prince Rupert says his plans to turn the town of Kitsault into an energy hub could include ... READ MORE