After Decades of Public Service, Judge Jones Joins Zuckerman Spaeder Barbara S. Jones, the federal judge in Manhattan and former prosecutor, is stepping down from the bench to join the law firm Zuckerman Spaeder. In an interview, Ms. Jones said that her last day as judge was on Friday and that she would start at Zuckerman Spaeder later this month. She presided over a wide range of cases, including the 2005 trial of Bernard J. Ebbers, the former chief executive of WorldCom, and the Justice Department's civil lawsuit against Visa and MasterCard, finding that the credit card companies violated the antitrust laws.
at January 04, 2013 No comments: Links to this post

NEW YORK (MarketWatch) — U.S. stocks rose on Friday and posted strong weekly gains, with the S&P 500 index closing at a five-year high, after Congress passed crucial budget legislation and data showed the economy is continuing to add jobs at a moderate pace.

The benchmark rose 4.6% for the week, its largest one-week percentage gain since the week ending Dec. 2, 2011.

“We had a huge rally on news of the fiscal-cliff resolution,” said Mark Luschini, chief investment strategist at Janney Montgomery Scott. 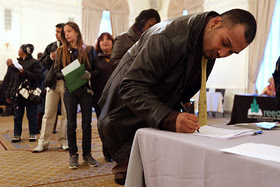 Getty Images Enlarge Image
Applicants register for a jobs fair in Manhattan. December’s payrolls expanded by 155,000.
“Today’s jobs report was a focus point that came in almost right on expectations,” he said.

Before the market opened, the Labor Department reported that nonfarm payrolls rose by 155,000 in December and the jobless rate stood at 7.8%. See: U.S. economy creates 155,000 jobs in December.
Economists polled by MarketWatch expected an increase of 160,000 jobs. See charts breaking down 2012’s jobs data.

November’s unemployment rate, originally reported as 7.7%, was changed to 7.8% after the annual revisions conducted each December.

A separate report showed that service-sector growth accelerated in December, with the Institute for Supply Management’s services-sector index rising to 56.1% from 54.7% in November.

Around 651 million shares traded on the New York Stock Exchange. Composite volume topped 3.4 billion.
Financials and materials were the biggest gainers and information technology the biggest weight among the S&P 500’s 10 major sectors.

The technology-heavy Nasdaq Composite index COMP +0.04%  gained 1.09 points, or 0.04%, to 3,101.66, with shares of iPhone maker Apple Inc. AAPL -0.24%  down 2.8%. See: Apple, Microsoft pressure tech.
For the week, the Nasdaq Composite gained 4.8%.The Consumer Electronics Show will take place in Las Vegas next week, with developments in TV sets and smaller tablet and PC-hybrid devices expected to be in the spotlight. Read MarketWatch’s preview of CES.


Alcoa Inc. AA +2.09%  rallied 2.1%, making it the top gainer in the Dow, with the aluminum producer due to report fourth-quarter results on Tuesday, marking the unofficial start of corporate earnings-reporting season. See: Tech, bank forecasts slashed in run-up to earnings.
“The focus is going to be on corporate earnings,” Luschini said. ”If companies are reporting numbers that match or exceed expectations, then that will invite investors that have been sidelined because of the paralysis over the fiscal cliff” back into the market.

n a dramatic, 11th-hour vote, Congress passed budget legislation Tuesday that averted the fiscal cliff, at least in the short term, by rasing taxes only on a small portion of the wealthiest Americans and extending unemployment benefits. The fact that any legislation was approved at all — given the partisan divisions in Washington — triggered a huge relief rally on Wall Street.

The budget deal, however, largely bypassed the issue of spending cuts, setting up another political fight in a few weeks. In addition to spending, Congress and President Barack Obama must reach a compromise on the $16.4 trillion debt ceiling to prevent the U.S. from defaulting on its debt.

Europe's week ahead: All eyes on ECB With U.S. fiscal-cliff concerns in abeyance, all eyes will be on the European Central Bank and whether it cuts rates given the current weakness in the euro-zone economy. U.K. retailers also will be in the firing line.


But many retirement savers face their own fiscal cliff. Read more about how delays and indecision are bad for your financial health.
U.S. stocks fell on Thursday, breaking a two-session winning streak, after minutes from the Federal Reserve’s December policy meeting showed officials see an end to the central bank’s bond-buying program in 2013.

The Fed minutes hit gold futures hard, since the precious metal has been a big beneficiary from quantitative easing.

“The gold market is clearly signaling the concern of the end of the liquidity [provided by the Fed],” Luschini noted.

Among individual stock moves, Eli Lilly & Co. LLY +3.70%  shares rallied 3.7% after the drug company said it expects profit to rise in 2013 and reaffirmed its commitment to fund its dividend at least at the current level.

Citigroup Inc. C +2.51%  gained 2.5% after the bank was upgraded by Goldman Sachs to a conviction list-buy rating, citing 18% upside.

“We believe [Citigroup’s] shares are mispriced given the company’s earnings power,” Goldman analysts wrote in a research report. See: Citigroup and SunTrust gain after Goldman calls.
Polya Lesova is MarketWatch's New York deputy bureau chief. Follow her on Twitter @PolyaLesova.
at January 04, 2013 No comments: Links to this post

The Daily Guru
Where Are Currencies Headed in 2013?, Dean Popplewell

No-Nonsense Investing
4 Predictions and a Wild Card for Investors in 2013, Howard Gold

Jim Jubak on MoneyShow.com
The New Year's Liquidity Hangover
7 Steps to Success in 2013

Ideas from Around the World
5 UK Shares to Bet On in 2013, David O'Hara

Home sales in the Greater Vancouver declined nearly 23% in 2012, according to ... READ MORE

BC Place roof costs lawsuit gets sticky over grease stains

A BC Supreme Court filing by a lawyer for Canam Group indicates BC Place stadium's grease-stained roof ... READ MORE

Trading Idea of the Day
Are We Seeing Gold's Last Hurrah?, Przemyslaw Radomski

Analysis | The Cybersecurity 202: Coronavirus response is officially a new front in the election security fight