WASHINGTON — The U.S. Department of Labor's Bureau of International Labor Affairs today announced a $10 million cooperative agreement to World Vision for a project to combat child labor in Cambodia's agriculture, fishing, fisheries, aquaculture and domestic service sectors.
World Vision will partner with local nongovernmental organizations Wathnakpheap, Farmer Livelihood Development, Vulnerable Children Association Organization, and Cambodia Development Resource Institute. The project will provide education, sustainable livelihood and youth employment services to children engaged in or at risk of child labor, and other members of their households. It also will help households and vulnerable children to access social protection programs that are supported by the Royal Government of Cambodia.
Since 1995, the Labor Department has funded 260 projects implemented by more than 65 organizations in 91 countries, which have resulted in the rescue of approximately 1.5 million children from exploitative child labor. ILAB currently oversees more than $210 million of active programming to combat exploitative child labor. More information on the agency's efforts is available at http://www.dol.gov/ilab/.
Posted by Fernando Guzmán Cavero at November 26, 2012 No comments:

Facebook not so fun with a click from boss or mom LONDON (Reuters) - Posting pictures of yourself plastered at a party and talking trash online with your Facebook friends may be more stress than it's worth now that your boss and mom want to see it all.

Apple seeks to add more products to Samsung patent lawsuit (Reuters) - Apple Inc has asked a federal court to add six more products to its patent infringement lawsuit against Samsung Electronics Co, including the Samsung Galaxy Note II, in the latest in move in an ongoing legal war between the two companies.

Nokia imaging chief to quit HELSINKI (Reuters) - Nokia's long-time imaging chief Damian Dinning has decided to leave the loss-making cellphone maker at the end of this month, the company said in a statement.

Autonomy founder says HP allegations don't add up LONDON (Reuters) - Mike Lynch, mathematics whiz and former boss of Autonomy, said he can't see how accusations leveled by Hewlett-Packard Co of dodgy accounting add up to a $5 billion writedown on the software business he sold them last year.
Posted by Fernando Guzmán Cavero at November 26, 2012 No comments:

Posted by Fernando Guzmán Cavero at November 26, 2012 No comments:

With the retirement of Senator Joseph I. Lieberman in January, John McCain and Lindsey Graham will lose the veneer of bipartisanship that helped their policy goals.

White House officials are reaching out to voters who supported President Obama during the campaign and asking them to help him as he negotiates with Congress.
ADVERTISEMENT 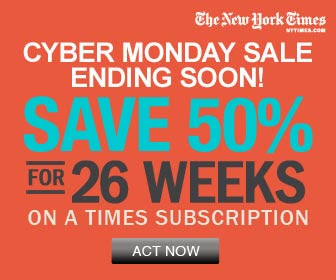 Republican and Lesbian, and Fighting for Acceptance of Both Identities

Some lesbian Republicans fear that the party's stance on gay issues could mean few younger reinforcements, even as older Republican lesbians step forward.

Americans could spend nearly $200 billion less next year on cars, clothes, furniture and other consumer products than they would otherwise if automatic tax increases take effect as currently scheduled, according to a White House report.

Anti-Tax Advocate Says Some in G.O.P. Are Wavering

Grover Norquist on Monday found a new way of dismissing the handful of Republican lawmakers - including the House majority leader - who are now publicly wavering about his pledge they signed not ever to raise taxes.
ADVERTISEMENT

This feature follows the talks between President Obama and Congressional leaders over the so-called fiscal cliff.

One proposal being floated as an alternative to raising the top marginal rate would place its heaviest tax burden on the somewhat wealthy as opposed to the very wealthy.

A look at how different demographics voted in 2012.

Results from the 2012 presidential, Senate and House Races.
Posted by Fernando Guzmán Cavero at November 26, 2012 No comments:

Silver market analyst and newsletter writer Ted Butler today provides, via GoldSeek's companion site, SilverSeek, "A Manipulation Timeline," describing the history of manipulation of the silver price from the early 1980s to the present as the concentrated short position in the futures market was rotated from Drexel Burnham Lambert to AIG, Bear Stearns, and then JPMorganChase:

Who Will Lead the S.E.C.? Elisse B. Walter, a commissioner at the S.E.C, will succeed Mary L. Schapiro as the head of the agency. President Obama is expected to eventually name a replacement. Here's who is under consideration.
Posted by Fernando Guzmán Cavero at November 26, 2012 No comments: