The New York attorney general is investigating whether some of the nation’s biggest private equity firms have abused a tax strategy in order to slice hundreds of millions of dollars from their tax bills, according to executives with direct knowledge of the inquiry. The attorney general, Eric T. Schneiderman, has subpoenaed more than a dozen firms seeking documents that would reveal whether they converted certain management fees into fund investments, which are taxed at a far lower rate than ordinary income.

Executives at some firms said they feared that Mr. Schneiderman, a Democrat with ties to the Obama administration, was seeking to embarrass the industry because of Mr. Romney’s roots at Bain. Others suggested the subpoenas might be part of an effort to recover more tax revenue for New York.

Posted by Fernando Guzmán Cavero at September 01, 2012 No comments:

The Economist | Politics This Week: Highlights of news coverage from August 25th. - 31st. 2012

» In Syria, government forces were reported to have killed at least 380 people in Daraya, a town on the south-western edge of Damascus, the capital. President Bashar Assad said his forces needed "more time" to win the battle against the rebels, and dismissed as "unrealistic" the idea, suggested by Turkey's foreign minister among others, that humanitarian corridors or a buffer zone should be set up within Syria. See article»
» Hundreds of Muslims rioted for several days in the Kenyan port of Mombasa, leaving three policeman and a civilian dead. The rioting came after a Muslim cleric, Aboud Rogo Muhammad, who was accused of recruiting young men to fight for the al-Qaeda-linked Shabab militia in Somalia, was killed in a drive-by shooting. It was unclear who shot him.
» Muhammad Morsi, Egypt's new president, flew to China and Iran, saying he sought a "balanced" foreign policy. It was the first time in decades that an Egyptian president, mindful of ties to America, had visited Iran. In Tehran he attended a summit of the Non-Aligned Movement. See article»
At least they're talking

» In another sign of change inside the secretive state, North Korea held its first talks with Japan in more than four years. The discussions, which Japan stressed were "preparatory", were about the return of the remains of Japanese who died on the Korean peninsula during the second world war. The two countries have no diplomatic relations.
» A former state education minister was among 32 people convicted for their role in the deaths of Muslims massacred during 2002's bloody sectarian riots in India's Gujarat state. She was a close associate of Gujarat's chief minister, Narendra Modi, a favoured candidate to lead the Hindu-nationalist Bharatiya Janata Party at the next general election. Mr Modi has long denied any involvement in the riots. See article»
» President Thein Sein of Myanmar reshuffled his cabinet, easing out hardliners and bringing in nine new ministers, among them economic reformers who favour foreign investment.
» The Chinese media reported that a former senior regional official had fled the country with millions of dollars. Wang Guoqiang, the party secretary of Fengcheng city in the north-east, is said to have absconded with $31m. A report released by China's central bank last year said more than $120 billion had been stolen over two decades by corrupt officials who had gone overseas. See article»
An end in sight?
» Colombia's president, Juan Manuel Santos, confirmed reports that his government has been holding talks about talks with the FARC guerrillas. Formal peace negotiations may start in October, but they will be held outside the country. Mr Santos said military operations would continue. See article» 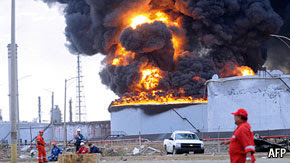 » A fire at Venezuela's biggest oil refinery killed at least 42 people, injured almost 100 and destroyed or severely damaged more than 200 houses. Local residents claimed that gas had been leaking from the refinery for several days. The oil workers' union blamed poor maintenance for the disaster, which came six weeks before a presidential election in which Hugo Chávez is seeking a third term. See article»
» A supreme-court justice in Brazil overturned a ruling by a lower court that had suspended the construction of Belo Monte, a large hydroelectric dam in the Amazon.
» Student protests flared again in Chile: tens of thousands marched in Santiago and several schools were occupied. After sustained protests last year calling for an end to education for profit, the government agreed to lower the interest rate on student loans and to give universities extra money.
Catalan cascade
» Catalonia, Spain's second-largest region, requested €5 billion ($6.3 billion) from a special €18 billion public rescue fund. But it irritated the government in Madrid by insisting that it will not accept political conditions for the aid. Other regions are also likely to demand bail-outs. See article»
» Said Afandi, the influential leader of a Sufi Muslim group in Dagestan, in Russia's north Caucasus, was killed with six other people by a female suicide-bomber who approached his house disguised as a pilgrim. The attack could worsen a long-standing confrontation between radical Islamists and moderate Muslims in Dagestan. See article»
» Georgian forces shot dead 11 gunmen in an operation to free hostages near the frontier with Dagestan. Three of its own troops were also killed. Georgia's interior ministry did not give the nationality of the gunmen or say whether they had entered the country from Russia.
» A Ukrainian high court rejected an appeal by Yulia Tymoshenko, a former prime minister, against her conviction for abuse of office, leaving her in jail and Ukraine's relations with the West severely strained. Ms Tymoshenko's defence lawyer said the ruling had been steered by Viktor Yanukovych, the president, for political reasons.
» A court in Norway decided that Anders Behring Breivik was sane, and sentenced him to at least 21 years in prison for last year's bombing in central Oslo, which killed eight people, and the mass shooting at a Labour Party youth camp, where he killed another 69.
Of biblical proportions 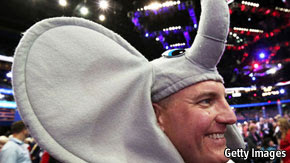 » The start of the Republican convention in Tampa, Florida, was disrupted as Hurricane Isaac passed close by, but it didn't stop Mitt Romney from being formally nominated as the party's presidential candidate after the traditional roll-call of pledges from the state parties. Now that he is the official candidate, Mr Romney can start to spend the vast war-chest he has been hoarding to fight the presidential election. See article»
» Hurricane Isaac bore down towards New Orleans, seven years after Katrina struck the city. It was the first big test of newly built flood defences along the Gulf coast. Heavy rains and surging waters were expected to affect the region for days. Earlier the tempest killed 29 people in the Dominican Republic and Haiti. See article»
» Just before the Republican convention Charlie Crist, a former Republican governor of Florida who left the party in 2010, created another storm by endorsing Barack Obama for president. He will give a speech explaining why at the Democratic convention in Charlotte, North Carolina.
Posted by Fernando Guzmán Cavero at September 01, 2012 No comments:

Email ThisBlogThis!Share to TwitterShare to FacebookShare to Pinterest
Labels: The Economist | Politics This Week: Highlights of news coverage from August 25th. - 31st. 2012

The Economist | Business This Week: Highlights of news coverage from Agust 25th - 31st 2012

» The smartphone industry was engrossed by the potential ramifications of a big victory for Apple in its legal battle with Samsung over patents. A jury in San Jose sided with Apple in finding that Samsung had "wilfully" copied bits of the iPhone and iPad and awarded it $1 billion in damages. Samsung plans to appeal against the verdict, which could also have big implications for other smartphone-makers and for Google's Android operating system, which runs on over half the phones sold globally. See article»
» Lexmark said it was pulling out of the inkjet-printing business to focus on laser and digital printing. Based in Kentucky, Lexmark is a small player in the personal-printer industry compared with HP and Canon. Smartphones and tablets are changing the market as people can now easily keep stored documents to hand, obviating the need to print.

The anti-Bob
» Barclays appointed Antony Jenkins as its new chief executive, after Bob Diamond's resignation because of the bank's role in the LIBOR rate-fixing scandal. Mr Jenkins currently runs the retail side of the bank. He moves into the top job just as Barclays faces another investigation into its practices, this time into its capital-raising activities in the Middle East in 2008. See article»
» Citigroup agreed to pay $590m to settle a lawsuit launched in 2007 by some shareholders who claimed the bank had misled them about its exposure to subprime-mortgage debt. Citi denies the allegations, but said it was "pleased to put the matter behind us".
» M&T Bank, which is based in Buffalo, New York, agreed to pay $3.7 billion for Hudson City, a struggling New Jersey lender, in one of the biggest American bank deals since the financial crisis. The acquisition will help boost M&T's capital buffers before new international standards come into force next year.
» In a statement issued without the usual summit to precede it, the G7 called on oil-producing countries to increase output in order to dampen oil prices, which have risen since June because of concern about a potential Israeli military strike on Iran. Brent crude is now above $110 a barrel, up from $90 two months ago, raising fears that high prices will hinder a global recovery. 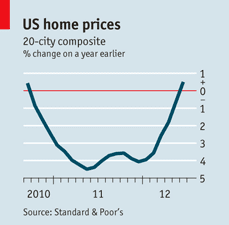 » Russia's Gazprom confirmed it was pulling the plug on developing the huge Shtokman gasfield because of the cost. The Arctic project's original aim of supplying liquefied natural gas to America was thrown off course by the abundance of shale gas there.
» Daikin, a Japanese maker of air-conditioning and heating systems, agreed to buy Goodman, a Texan rival, for $3.7 billion. It is the latest overseas acquisition by a Japanese company in a bumper year for such deals. Between January and June Japanese firms made 262 foreign acquisitions, according to Recof, a consultancy: a record for the first half of a year. The strong yen, combined with sluggish domestic demand, is spurring Japan's businessmen to expand abroad.
» The S&P/Case-Shiller home-price indices recorded positive growth for the first time in two years. Although growth was still low, the data further underline the nascent recovery in America's housing market.
Off track
» Sir Richard Branson's Virgin Trains launched a legal challenge to the British government's decision to award the franchise for running the main railway line between London and Glasgow to FirstGroup, a bigger rival. Virgin had held the franchise for 15 years until FirstGroup submitted a higher price for it in recent bidding. Sir Richard thinks the Department for Transport has not properly assessed FirstGroup's offer.
» BYD, a Chinese carmaker backed by Warren Buffett, saw its first-half profit plunge by 94%. Car sales have drooped at the company, known as "build your dreams" at the height of the Chinese boom. The Chinese market for new cars is expected to grow by around 8% this year, a sharp brake on the 46% that was achieved in 2009. Its solar-panel business is also suffering because of the debt crisis in Europe.
Rental agreement
» Hertz sealed a deal to buy Dollar Thrifty, after a two-year pursuit of its smaller rival in which it doubled its offer to $2.6 billion. The combined company will account for 24% of America's car-hire market. See article»
» G4S booked a £50m ($80m) charge related to its failure to provide enough security staff at the London Olympics. The shortfall in personnel was filled by the armed forces, and was an embarrassment for the security-services company as well as the organisers. G4S, which employs 650,000 people in 125 countries, promised to produce enough staff for the Paralympics, which started in London this week.

Posted by Fernando Guzmán Cavero at September 01, 2012 No comments: