Judge urges Apple and Samsung to settle ahead of verdict | From Reuters Technology Report - August 15, 2012 - 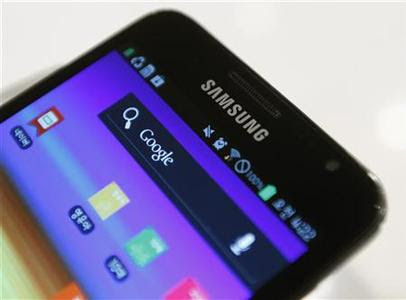 (Reuters) - A U.S. judge asked that the chief executives of Apple Inc and Samsung Electronics Co Ltd speak to each other at least once on the phone before a jury begins deliberating next week in the high-stakes patent trial between the two tech giants.
"It's time for peace," U.S. District Judge Lucy Koh said on Wednesday in a San Jose, California, federal court, just miles from Apple's headquarters.
Apple and Samsung are going toe-to-toe in a patents dispute mirroring a struggle for industry supremacy between the two rivals that control more than half of worldwide smartphone sales.
Apple accuses Samsung of copying the design and some features of its iPad and iPhone, and is asking for a sales ban in addition to monetary damages. South Korea's Samsung, which is trying to expand in the United States, says Apple infringed several patents, including some for its key wireless technology.
The U.S. trial is now in its third week. Before the jury was brought into the courtroom on Wednesday, Koh told attorneys for the companies that they had succeeded in raising awareness about the importance of their intellectual property rights.
Top executives from both companies had participated in mediation with a U.S. magistrate judge before trial, but Koh asked them to explore settlement once again.
The nine-member jury is scheduled to begin deliberations next week.
"I see risks here for both sides," Koh said.
The case in U.S. District Court, Northern District of California, is Apple Inc v. Samsung Electronics Co Ltd et al, No. 11-1846.
(Editing by Phil Berlowitz)

The key to this chart from "The Untold Story of Municipal Bond Defaults", a new New York Fed post by Jason Appelson, Eric Parsons and Andrew Haughwout, is that the Moody's figure only includes the bonds it actually rated. S&P's numbers were similarly limited; the authors found 2,366 defaults from 1986 to 2011, while the agency reported just 47 during that time.
So how did the ratings agencies vastly under-report the number of muni defaults in the last 3 decades? The authors explain that there are two types of muni bonds: general obligation bonds, in which default is rare and which are backed by the city or state issuing them; and revenue bonds, which are backed by the income stream generated by things like highways or fancy new sports stadiums. Revenue bonds are essentially as risky as what's being built, and they've accounted for around 60 to 70 percent of new issuance in the last 16 years.
Despite some worrisome reports on muni bonds -- Moody's downgraded 290 issuers last quarter, the highest quarterly total since 2000 -- there's reason to believe that most muni bond defaults won't come from a downturn in the economy. The study's authors couldn't tie their broader landscape of muni defaults to economic downturns:

The absence of a clear pattern leads us to believe that municipal bond defaults may be more of a product of idiosyncratic factors associated with individual sectors or issues than the result of broad macroeconomic developments.

Though the authors don't report the dollar amount of the muni defaults they've found, the implication from their report is that your local city and state investments may be far more risky than the ratings agencies' data indicates. The "idiosyncratic factors" the authors cite could include things like buying high-risk MBS SIVs from brokers who themselves don't understand what they're selling, being sold ill-conceived derivatives to finance county sewers or building New Jersey mega-malls with indoor ski slopes.
Even beefed-up SEC supervision over muni issuers may not stop us from building things called "Xanadu". -- Ryan McCarthy
And on to today's links:
Urban Panning
China's megapolises: impressive on paper, awful places to live - Foreign Policy
Survival Skills
Probablity and game theory in The Hunger Games - Wired
Regulations
New York Fed chief on the "glaring vulnerability" of money market funds - Bloomberg
Must Read
The new American exceptionalism: paying far less taxes than almost any other industrialized nation - Eduardo Porter
Alpha
More than 44% of Paulson's U.S. stock holdings are tied to gold - Bloomberg
Chart: Bonds are beating both stocks and gold over the last two years - The Big Picture
Romney's hedge fund bundlers include the Robertsons, Dan Loeb, Cliff Asness - Absolute Returns
Fundamentalists
"Outsourcing is essentially the same as importing a good from a foreign country" - Robert Barro
John Thain, Phil Gramm and the rest of Romney's economic bench - Fortune
Politicking
Romney bravely says nothing about whether he'd tax carried interest - Fortune
Romney: I'm a businessman, not a business, man - Matt Yglesias
Oxpeckers
Wired to publish Jonah Lehrer, despite quote fabrication scandal - BuzzFeed
at August 15, 2012 No comments: Links to this post

Efforts to free the Democratic convention from business and lobbyist support have prompted charges of hypocrisy from Republicans and grumbling among some Democrats.

A judge rejected a suit challenging the law's constitutionality, clearing the way for it to be applied in this year's election.

The president, aides said, will use the last day of a three-day bus tour of Iowa to take on Mitt Romney and his running mate, Paul D. Ryan, over the health care program for older Americans.

The partisan brawl over the program continued on Tuesday and threatened to become the focus of the presidential race.

By TRIP GABRIEL and NICHOLAS CONFESSORE

Obama Returns to Iowa in Bid to Reignite the Fervor

President Obama is on a three-day trip in the state that birthed his bid for the White House, this time using the broad reach of his office.

Details start to emerge of what went on during Paul D. Ryan's private meeting with Sheldon Adelson and other donors in Las Vegas.

A huge cash advantage and a shift to the ideological right were not enough to protect Representative Cliff Stearns of Florida from anti-incumbent sentiment. He lost his bid for a 13th term to a political newcomer, Ted Yoho.

The Democrats' war on Representative Paul D. Ryan has moved into the Upper Chamber, and it is extending beyond the battle over Medicare.

For Romney, a New Running Mate May Mean a New, Less Elliptical, Workout, Too

Even Mitt Romney's exercise routine is open to tinkering at the hands of his younger (and fitter) running mate.

The Canadian Radio-television and Telecommunications Commission (CRTC) has ordered Telus (TSX:T) to open up its books and explain just how it calculates the foreign ownership composition on its stock.

The BC Securities Commission (BCSC) has cease traded Barkerville Gold Mines Ltd. for its failure to file a completed technical report supporting the company’s disclosure of a massive gold resource at its Cow Mountain deposit.

Thompson Creek Metals Company Inc. (TSX: TCM) is shutting down the mining portion of the company’s molybdenum Endako mine and cutting back staff for “a short period of time” as it grapples with low molybdenum prices.

Melbourne and Vienna have beaten out Vancouver in a new report ranking the world’s most livable cities in 2012.

The Canadian Taxpayers Federation (CTF) is urging the provincial government to scrap the carbon tax, which it says is hurting B.C. businesses.

Dragons' Den's Treliving among those inducted into Restaurant Hall of Fame

Boston Pizza International partners Jim Treliving and George Melville will be among the restaurateurs inducted into the 2012 BC Restaurant Hall of Fame in October.
at August 15, 2012 No comments: Links to this post

US Markets | Futures Market Indicator: Dow is set to drop 700 points at the open as coronavirus cases outside China surge