New York City plans to enact a far-reaching ban on the sale of large sodas and other sugary drinks at restaurants, movie theaters and street carts, in the most ambitious effort yet by the administration of Mayor Michael R. Bloomberg to combat rising obesity.

The proposed ban would affect virtually the entire menu of popular sugary drinks found in delis, fast-food franchises and even sports arenas, from energy drinks to pre-sweetened iced teas. The sale of any cup or bottle of sweetened drink larger than 16 fluid ounces — about the size of a medium coffee, and smaller than a common soda bottle — would be prohibited under the first-in-the-nation plan, which could take effect as soon as next March.

At Gupta Trial, Seeking to Discredit Galleon Traders To discredit prosecution witnesses, lawyers defending Rajat K. Gupta, a former director of Goldman Sachs and Procter & Gamble, sought to portray the Galleon Group hedge fund as a place where traders routinely boasted about their inside connections that did not exist.

Email ThisBlogThis!Share to TwitterShare to FacebookShare to Pinterest
Labels: Stocks and Markets in the News | Wall Street at Close.

Jim Jubak on MoneyShow.com
Brazil's Gift to Freeport McMoRan
Is the Housing Recovery for Real?

Stocks and markets in the News | Oil Futures: Oil Closes at $88 a barrel, lowest close since October.

SAN FRANCISCO (MarketWatch) — Crude-oil futures dropped Wednesday to mark their lowest close since October as the U.S. dollar strengthened and as concerns over Spain and scaled-back expectations for Chinese economic stimulus dulled the prospects for oil demand.
“It’s a continuation of the justified concerns about the dire state of the health of the European economy, which when coupled with outlooks such as my own that markets were relatively well supplied, eventually had to filter through into lower prices,” said Matthew Parry, a senior oil-market analyst at the International Energy Agency.
The July contract for light, sweet crude-oil futures CLN2 -3.65%  fell $2.94, or 3.2%, to settle at $87.82 a barrel on the New York Mercantile Exchange, after touching a low of $87.49.
It was the lowest settlement price for a most-active futures contract since October, according to FactSet Research. Month to date, futures prices have lost 16%.
Click to Play

European Central Bank officials signal they would oppose any attempt to fund the $23.8 billion recapitalization of Spain's Bankia via the central bank's lending facilities.

The drop came as the ICE dollar index DXY +0.69% , which measures the greenback against a basket of six global currency counterparts, rose to 82.995 from 82.468 in North American trade Tuesday.
The euro EURUSD -1.0106% , meanwhile, fell to $1.2384 from $1.2493 late Tuesday. Read more on currencies.
Investors were generally pulling out of risk assets as lingering concerns about Spain’s finances stoked fears about the euro zone. The country saw bond yields surge after Egan-Jones Ratings Co., on Tuesday after the European markets closed, downgraded Spain to B from BB- with a negative outlook, pushing Spanish debt further into junk status.
The Spanish downgrade “reminds everyone that the European problems are about far more than Greece,” said Parry.
U.S. and European stocks traded sharply lower, with the Dow Jones Industrial Average DJIA -1.14%  losing more than 148 points at last check, as Spain’s bond yields climbed and data on U.S. pending-home sales showed a decline for April. Read more on U.S. stock action. 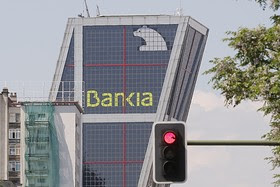 Reuters
Spain's Bankia bank headquarters in Madrid.
Asian markets mostly declined as some expectations for action from Beijing were scaled back after state-run media reported Tuesday that Chinese authorities won’t resort to aggressive stimulus to stabilize growth. Read Asia Markets.
State media also cited several senior Chinese economists as saying any stimulus the government provided would be mild compared with the one launched in late 2008. Read more about the economists’ comments.
Elsewhere in the energy complex, June gasoline prices RBM2 -1.82% lost 5 cents, or 1.7%, to end at $2.86 per gallon, and heating oil for delivery in the same month HOM2 -2.62%  shed 7 cents, or 2.5%, to $2.74 per gallon.

Delayed due to Monday’s Memorial Day holiday, the American Petroleum Institute will release its weekly data on petroleum supplies later Wednesday, and the U.S. Energy Information Administration will release its data Thursday at 11 a.m. Eastern.
Analysts polled by Platts expect that supplies of crude oil climbed by 100,000 barrels for the week ended May 25. They also forecast unchanged inventories of gasoline and a rise of 150,000 barrels in distillate stocks.
Rounding out action in the energy markets Wednesday, July natural-gas futures NGN12 -2.41% , on its first full day as a front-month contract, gave up 7 cents, or 2.7% to finish at $2.42 per million British thermal units.
The EIA will release its weekly data on natural-gas supplies in storage on Thursday at 10:30 a.m. Eastern, as usual.
Analysts polled by Platts expect the data to show that natural gas supplies rose between 67 billion cubic feet and 71 bcf for the week ended May 25.
Myra Saefong is a MarketWatch reporter based in San Francisco. Varahabhotla Phani Kumar is a reporter in MarketWatch's Hong Kong bureau. Sara Sjolin in London contributed to this report.
at May 30, 2012 No comments: Links to this post

Email ThisBlogThis!Share to TwitterShare to FacebookShare to Pinterest
Labels: Stocks and Markets in the News | Oil Futures

Submitted by cpowell on 10:59AM ET Wednesday, May 30, 2012. Section: Daily Dispatches 2p ET Wednesday, May 30, 2012
Dear Friend of GATA and Gold:
John Embry of Sprott Asset Management is really getting around today, elaborating for King World News on the "massive manipulation and interference" in the gold market. "They knock gold down when it obviously should be going higher," Embry says, echoing GATA's long-running complaint about the counterintuitive moves in the gold price.
Indeed, if the Northern Hemisphere was destroyed in a nuclear war, the Federal Reserve, JPMorganChase, and HSBC would get some brokers to Sydney, Rio de Janeiro, and Johannesburg to sell gold futures massively and drive the price down by at least 5 percent. Kitco market analyst Jon Nadler would crawl out from the ruble and opine to the cockroaches that the gold price had fallen because so many gold buyers had been killed, as he always had predicted would happen. CPM Group's Jeff Christian would telephone New Zealand not to worry because he was flying down with reams of gold-colored paper that would work just as well in Wellington as it did in New York as long as nobody asked what was behind it. And the World Gold Council would console itself with whatever high-fashion models could be found wearing gold nose rings in French Polynesia.
But with London and New York razed, at least we'd be spared more contrived rationalizations about the strange market action from the Financial Times and Wall Street Journal.
Monetary metals investors should understand that, as geopolitical analyst Jim Rickards somehow was allowed to say on CNBC three years ago, "When you own gold you're fighting every central bank in the world." It's them or humanity, slavery or freedom. Get used to it. Besides, we're winning.
An excerpt from Embry's interview is posted at the King World News blog here:
http://kingworldnews.com/kingworldnews/KWN_DailyWeb/Entries/2012/5/30_Em...
CHRIS POWELL, Secretary/Treasurer
Gold Anti-Trust Action Committee Inc.

Email ThisBlogThis!Share to TwitterShare to FacebookShare to Pinterest
Labels: GATA | THE GATA DISPATCH

Baja lays off 40% of Vancouver staff

The saga continues at embattled Baja Mining Corp. (TSX:BAJ) with this morning’s announcement that it has laid off 40% of the staff and consultants at its Vancouver headquarters.

If $1.2 billion in tax revenue and 4,000 new jobs can’t sell British Columbians on the merits of the Northern Gateway pipeline, Enbridge Inc. (TSX: ENB) is hoping a $5 million ad campaign will.

Colleagues are celebrating the life and career of Ray Torresan, the founder of one of Vancouver's most successful advertising and PR agencies, who died of cancer on Sunday aged 73.