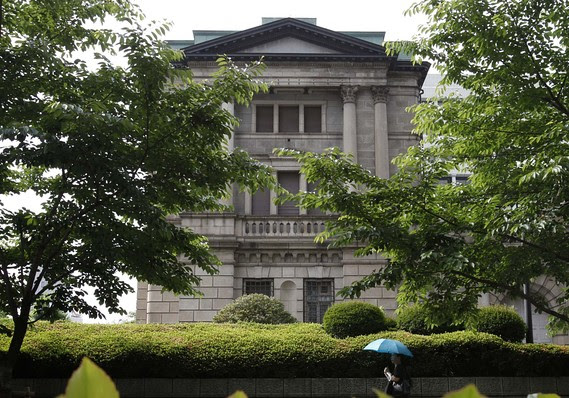 Reuters
The Bank of Japan building in Tokyo.
LOS ANGELES (MarketWatch) — The Bank of Japan Tuesday cut its economic growth forecasts through fiscal 2012, while keeping its interest-rate target unchanged.
After predicting last October that gross domestic product would grow 0.2% to 0.4% in the current fiscal year ending in March, the central bank said Tuesday that the period would instead show a contraction of between 0.3% and 0.4%.
“Growth prospects will likely be lower for fiscal 2011, due to the revision of past GDP statistics in addition to the slowdown in overseas economies,” the Japanese central bank said.
The bank’s Policy Board also cited a strong yen as hampering recovery.
But it added that “the economy is expected to gradually return to a moderate recovery path in the first half of fiscal 2012.”
While the Bank of Japan board members also revised down the fiscal 2012 view, it hiked its expectations for 2013.
GDP is now seen growing 1.8%-2.1% in fiscal 2012, down from a previous 2.1%-2.4% projection. For 2013, growth is seen at 1.4%-1.7%, up from 1.3%-1.6% previously.

Did China's stock bubble begin in the U.S.? At the start of China's Year of the Dragon, JL Warren Capital founder Junheng Li says the China stock bubble's roots can be traced back to the U.S. Photo: AFP/Getty Images.

Among risks to its views, the central bank cited weaker growth from the European sovereign-debt crisis and concerns about “strains from balance-sheet repair” in the U.S. Read full Bank of Japan policy statement in English.
Meanwhile, the Bank of Japan also kept its policy overnight call-rate target at 0 to 0.1%, reiterating its commitment “to continuing the virtually zero interest-rate policy until it judges that price stability is in sight.”
The lack of an interest-rate move was widely expected.

Michael Kitchen is Asia editor for MarketWatch and is based in Los Angeles.

Posted by Fernando Guzmán Cavero at January 23, 2012 No comments:

Posted by Fernando Guzmán Cavero at January 23, 2012 No comments: