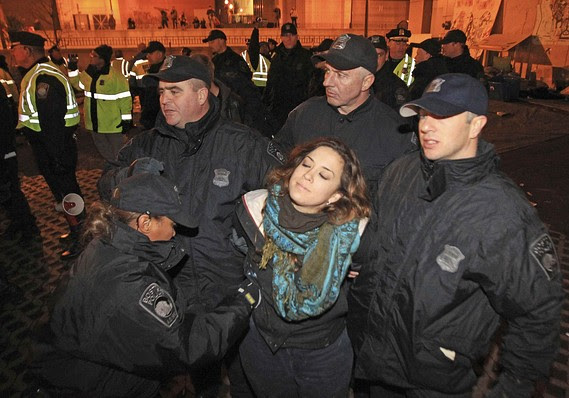 Reuters
Boston Police Department officers remove an Occupy Boston protester from Dewey Square in Boston. Police arrested dozens of people early Saturday as they cleared away the remaining encampment in the city's financial district in a mostly peaceful action.
NEW YORK (MarketWatch) — Police on Saturday removed an anti-Wall Street encampment in Boston’s financial district, arresting 47 in one of the last major U.S. cities where Occupy demonstrators had not yet been evicted, according to media reports.
More than 100 police officers took part in the predawn raid, which began with many of the campers still asleep, Reuters reported.
Thirty-three men and 14 women were arrested, mostly for trespassing, and no violence was reported, the news agency said.
“This is not over, it’s just changing,” Boston Police Commissioner Ed Davis said of the Occupy movement, which planned an evening gathering on the Boston Common, a roughly 50-acre green space in the city.
At a news conference Saturday, Boston Mayor Thomas Menino said the city was compelled to evict the protestors in the interest of public safety. He also commended the police for their work and protesters for their restraint, Reuters said.
Saturday’s sweep in Boston was not unexpected, as a Boston judge on Thursday lifted a temporary restraining order that had blocked an eviction, according to a report by the New York Times.
Protesters were notified by Friday that they faced arrest if they did not leave the premises by midnight, the newspaper said.
One protester, Steve O’Brien, a homeless 18-year-old, told the Times he did not know where he would go now, and that he had wanted to be arrested, but officers told him he was not old enough.
The eviction in Boston comes three days after police in San Francisco cleared an Occupy-inspired encampment. Police in New York forcibly ousted protestors from Zuccotti Park in the middle of the night on Nov. 15, and camps in Los Angeles and Philadelphia were cleared on Nov. 30.
The movement’s slogan, “We are the 99%,” is largely a statement about the distribution of wealth in the country and the one percent of Americans who hold a disproportionate share.
Kate Gibson is a reporter for MarketWatch, based in New York.
at December 10, 2011 No comments:

The week's top 10 videos on MarketWatch

In case you missed them, here are the 10 most popular videos that appeared on MarketWatch for the week of Dec. 5-9:

When will natural-gas cars hit?

Stacey Delo talks with Edmunds.com Senior Editor Bill Visnic about the natural-gas powered Honda Civic and why it's been difficult to bring alternative-fuel vehicles into the market.

Stocks like to climb a "wall of worry," according to Mark Hulbert, who says the positive readings on various investor-sentiment surveys suggest it will be tough for stocks to build on recent gains. Laura Mandaro reports.

A mansion on a bluff with San Francisco views

Located on a promontory on Belvedere Island, this 9,500 square feet home overlooks Richardson Bay and the San Francisco skyline, as well as Mount Tamalpais and the Golden Gate Bridge. The asking price for the six-bedroom house is $21,950,000.

Investors must stay in control

Even in a market that can outwit the wisest of investors, SmartMoney.com's Jack Hough discusses the three things every investor can control.

Mary Brown, a named plaintiff in the challenge to the Patient Protection and Affordable Health Care Act by the National Federation of Independent Business, tells Emily Maltby why she is so passionate about the Supreme Court case.

There's something hanging over homeowners' heads out in the nation's older suburbs: branches from aging shade trees. Recent storms showed how destructive and expensive the blow-down can be. Anne Marie Chaker & Leslie Yazel discuss.

Is the global economy doomed?

Economist and author Peter Schiff discusses events in Europe and the global economy.

The race is on to create the $300 house for use in developing countries. Professor Vijay Govindarajan explains how the competition came about and how reverse innovation is an opportunity for multinational companies in developed countries.

For former NBA All-Star Stephon Marbury, everything is smaller now that he's in China: the apartments, the contracts, the crowds. But the point guard for the Beijing Ducks says he came here to reboot, not fly high. Loretta Chao reports.