Today on SmartCompany we look at Warren Buffett’s $US5 billion bet on the US economy, ask how Gina Rinehart outranked Prime Minster Julia Gillard on a list of the most influential women in the world and look back at 10 classic videos from Steve Jobs’ brilliant career. Plus in Entrepreneur Watch, James Thomson asks whether suggestions online retail is less than 4% of total retail spending in Australia hides the real story about the rise of the internet.

For all this and more, head to our home page.

Email ThisBlogThis!Share to TwitterShare to FacebookShare to Pinterest
Labels: Smartcompany News and Analysis

SYDNEY (MarketWatch) — Stocks trading in Asia held in a tight range Friday, with investors apparently unwilling to make bold moves ahead of a U.S. Federal Reserve conference in Jackson Hole, Wyoming.
Indexes swung between positive and negative territory during the morning with Hong Kong’s Hang Seng Index HK:HSI +0.01%  up 0.7% and China’s Shanghai Composite index CN:000001 -0.47%  down 0.4%.
Japan’s Nikkei Stock Average  declined 0.1% in the morning session, while South Korea’s Kospi KR:0100 +0.26%  rose 0.3% and Australia’s S&P/ASX 200 index AU:XJO -0.20%  slipped 0.1%.
U.S. shares closed down on Thursday to break a three-session run of gains, with investors anxious ahead of a speech by Federal Reserve Chairman Ben Bernanke set for 10 a.m. U.S. Eastern time Friday. Read more on U.S. stocks
“The scope for market surprises is large, in our view,” said strategists at Barclays Capital.
“Bernanke may disappoint the market in different ways, or surprise it by delivering a strong speech in favor of quantitative easing and the benefits of its former versions,” they said. Read Bernanke speech preview.
The muted moves for the broader stock indexes concealed some larger changes for the stocks of individual firms.
Some banks were under pressure, with Daiwa Securities Group Inc. JP:8601 -2.60%   DSEEY +1.02%  down 2.6%, and Shinsei Bank Ltd. JP:8303 -1.19%   SKLKY -2.23%  falling 1.2% in Tokyo. 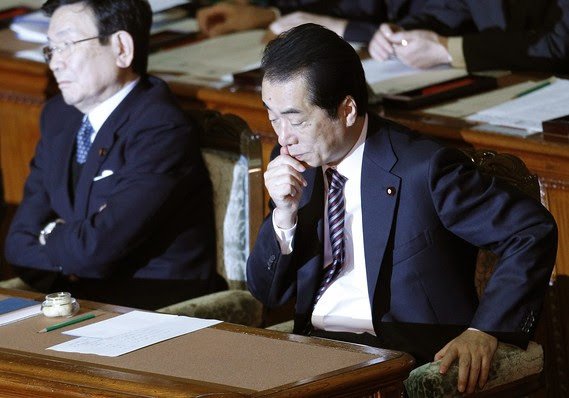 Reuters
Japan’s soon-to-depart Prime Minister Naoto Kan (at right).
SYDNEY (MarketWatch) — Japan is expected to get a new leader next week, with the move potentially helping to ease the path of policy making and end gridlock that has stymied attempts to heal the economy.
Japan’s current prime minister, Naoto Kan, has reportedly said that he expects his successor to be in office by Monday, when a party leadership election is slated, one day before the current lawmaking session ends. Read more on potential leadership change in Japan.
A change of leader may help the Democratic Party of Japan, in power since 2009, weather the storm of criticism that followed its handling of the earthquake and tsunami that devastated the country in March and led to one of the world’s worst nuclear disasters.
Of DPJ lawmakers expected to compete for the leadership, former foreign minister Seiji Maehara has gained the most popularity with Japanese voters, according to a Kyodo news service report this week.
How Japan stretched their low interest rates Japan's extra-low interest yields have led investors to seek out new opportunities for growth. But the so-called "double-decker" fund expose retail investors to high-yield, risky emerging markets. (Photo: Reuters.)

Moody’s criticized “frequent changes in administrations” as holding back development of the long-term policies needed to reduce the country’s debt pile.

The agency lowered Japan’s rating to Aa3 from Aa2, also citing the large deficits and the buildup in government debt since the start of the last global recession. Read more on Moody's downgrade.
Takahide Kiuchi, analyst at Nomura, said that “the markets had thought it would only be a matter of time before Moody’s took this step, which we think was designed to send a message to the incoming government about the need for fiscal discipline.”

Another change of leadership could herald fresh zeal toward addressing the country’s economic challenges, some analysts believe.

“Any type of greater cooperation between the leading and the opposition parties would mean a reduction in gridlock and greater probability for the passage of legislation. There has been forced co-operation ... but that’s not really a situation that can last forever,” said Naomi Fink, equity strategist at Jefferies in Japan.
Fink noted that Kan has made his resignation contingent on the passage of the budgets, the deficit-bond bill and the renewable energy bill through parliament.
She also offered some praise for Kan: “No other [Japanese] lame-duck leader has thought ‘I’ve got nothing to lose’ and really pushed ahead with key legislation that might not have otherwise passed.”
Kenichi Kawasaki at Nomura said that Kan’s successor is likely to continue to try to implement key economic policies already under consideration.
Kawasaki also believes that “the installation of a new administration would speed up decisions on key economic policies that have been delayed.”
The Japanese government has introduced two supplementary budgets since March to finance reconstruction efforts following the earthquake. A third budget is set to be introduced later in the year, which the Nomura analysts said will herald the introduction of 13 trillion yen ($168 billion) of spending over five years.
A bill aimed at issuing bonds in 2011 to help cover the country’s deficit is expected to be enacted shortly, securing about 40% of the ¥37 trillion revenue needed for the country’s fiscal-year budget, according to reports.
Kawasaki at Nomura also expects the gridlocked debate on raising consumption tax to move forward with a new leader.

Still, the widely held view is that fiscal policy needs to change longer-term in Japan.
“Continuously issuing debt into a vacuum is not a productive enterprise and is not sustainable,” Fink said.
“The whole point of loose fiscal policy is to engineer growth, and that growth must take place in order to justify the issuance of that debt, and for 20 years it hasn’t. So far, you have very little to show for it,” she said.