It's 2011. Do you know where your 401(k) is? Andrea Coombes reports today in her Ways and Means column about what to do with your 401(k) when you leave your job. One option is to just leave your money in a former employer's plan. She notes that according to estimates based on Labor Department data, there are about 15 million accounts owned by ex-employees stashed in employer plans. Plus, there are quite a few large employers out there where ex-employee accounts represent more than 60% of each firm's 401(k) accounts. Coombes points out that leaving your money with an ex-employer isn't the worst idea. The worst idea may be cashing out. Read more about ideas on what to do with the money and what to do if you're near retirement.

We know some people think that some bankers are snakes in the grass. But really, the tables are turned in this story. Al Lewis writes about a foreclosed house in Idaho that's infested with snakes. Lewis writes: "Zillow.com offers a sales description that mentions ‘a large kitchen with center island,' but nothing about snakes on the kitchen floor." Clearly, these snakes don't care about their FICO score.

And, today being the first trading day of June, don't miss this month's edition of Trading Strategies. Markets have been riding high thanks to the Fed's extensive quantitative easing since last fall. But what happens when the punch bowl goes away at the end of this month? Our top commentators have some answers. See the full Trading Strategies report for June.

Need a doctor to fill out a health form for your child's summer camp, school or day care? It may cost you extra.
Read more: Doctors stick patients with paperwork fees.

The latest private-sector data serve to confirm fears that the labor market is weakening — and don't augur well for what the Labor Department's May reading on U.S. nonfarm payrolls will show on Friday.
Read more: U.S. private sector adds 38,000 jobs in May.

An economist for polling giant Gallup told a congressional committee on Wednesday that small businesses are struggling to get credit despite other signs of life in the still-fragile U.S. economy.
Read more: Small business in ‘soft patch.'

Friday's pivotal data on growth in nonfarm payrolls take on even greater significance as ADP's lackluster report on private-sector hiring raises questions about the sustainability of the U.S. economic recovery.
Read more: Economists rush to mark down payrolls estimates.

China may bail out local governments

Why the bulls are set up for a fall in June

The easy money in the market is going to be on the short side once QE2 ends.
Read more: Why the bulls are set up for a fall in June.

No better bet than the dollar in rough times

Use these investment-pairing strategies to give yourself the best chance holding on through what could be a rough ride in June.
Read more: No better bet than the dollar in rough times.

Foreclosing on a bunch of snakes

With millions of foreclosures flooding the market, Chase is finding it difficult to sell an Idaho home that's infested with snakes, Al Lewis reports.
Read more: Foreclosing on a bunch of snakes.

Will the economic slump last?

Buffeted by natural and man-made forces, the U.S. economy is slumping just as several major tests loom in the fog ahead, writes Rex Nutting.
Read more: Will the economic slump last?

The best ETFs for dollar bulls or bears

Suddenly, after a nearly uninterrupted, decade long decline, the U.S. dollar seems to have changed course. Recent technical action and fundamental changes could well reverse that 10-year slide and offer investors in exchange-traded funds a chance for profits if the "almighty dollar" becomes mighty again.
Read more: The best ETFs for dollar bulls or bears.
at June 01, 2011 No comments: Links to this post

NEW YORK (MarketWatch) — U.S. stocks dropped on Wednesday, with bank issues taking the brunt of the pressure, as Wall Street scaled back its economic growth outlook following another round of dour data.
TRADING STRATEGIES: JUNE

The end of QE2
Markets have been riding high thanks to the Fed's extensive quantitative easing since last fall. But what happens when the punch bowl goes away at the end of this month?
• Why the bulls are set up for a fall in June
• Best post QE2 bet: a play on volatility
• How to invest for the end of QE2
• Gold is the only place for new money
• Think twice before jumping into tech
• No better bet than the dollar
• The best ETFs for dollar bulls or bears
• Take the bear stance on the dollar

“What is most concerning here is the pace of the economic fall-off, and the risk is growing that the downside isn’t over,” said John Brady, MF Global’s senior vice president of global interest rate products. Read about economists slashing expectations for May’s nonfarm-payrolls growth .
Tallying its worst single-day point drop since June 2010, the Dow Jones Industrial Average DJIA -2.22%  fell 279.65 points, or 2.2%, to 12,290.14. Financial powerhouses Bank of America Corp. BAC -0.09% , down 4.3%, and J.P. Morgan Chase & Co. JPM -3.42% , off 3.4%, were among the blue-chip names getting slammed.
Click to Play 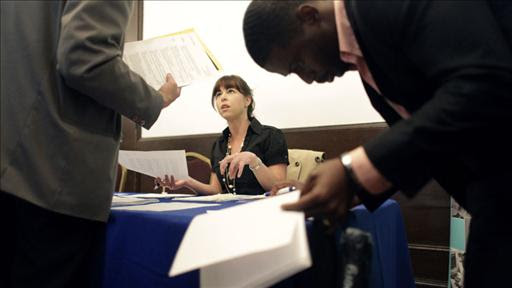 Private businesses barely added jobs in May as large companies cut workers, according to a report released Wednesday.

The Standard & Poor’s 500 Index SPX -2.28%   declined 30.65 points, or 2.3%, to 1,314.55 — its sharpest decline since Aug. 11, 2010.
The Nasdaq Composite Index COMP -2.33%   shed 66.11 points, or 2.3%, to 2,769.19.
For every stock rising, nearly four fell on the New York Stock Exchange, where volume neared 1.2 million and composite volume approached 4.5 million.
Treasury prices rallied, pushing the benchmark 10-year note yield UST10Y -3.86%   below 3% for the first time since early December, while the dollar softened and oil prices fell. Read more about bonds.
“This lower yield environment is going to hurt the banks, which in order to heal balance sheets have been rolling loans off their books, and making new loans at lower yields. The net interest margin for financials is really going to start feeling under pressure,” said Brady.

American companies added 38,000 employees to their payrolls in the past month, according to data from ADP Employer Services. Economists had been expecting an increase of 175,000. Read more about ADP payrolls report.
The Institute for Supply Management reported that growth in the U.S. manufacturing sector slowed, with its closely watched gauge dropping to 53.5% in May from 60.4% in April. See details of largest one-month drop since 1984.
On Tuesday, the Dow industrials finished May with a loss of 1.9%, their first monthly drop in six months.
Kate Gibson is a reporter for MarketWatch, based in New York.
at June 01, 2011 No comments: Links to this post

Indian IT firms: Another giant leap

Economics: How real is China's growth?

British politics: What is the best hope for the underclass: aspiration or grievance?

Language: Metaphors we do everything by

Audio: The cost of fighting cancer

Buttonwood: A return to the bad old days in Britain

Online debate: Is too much competition dangerous for banking?
at June 01, 2011 No comments: Links to this post

Google said Wednesday a hacker in China obtained access to hundreds of Gmail accounts, including those of senior U.S. government officials, Chinese political activists and journalists.

The company said it recently detected the security breach and stopped what it described as "a campaign to take users’ passwords and monitor their emails, with the perpetrators apparently using stolen passwords to change peoples’ forwarding and delegating settings."

Detroit Auto Makers Topped Importers in Sales in May

Ford, G.M. and Chrysler reclaimed industry leadership for the first time in five years as Toyota and Honda were hurt by production disruptions.

The high price of oil, combined with a sickly economy, has retailers dispensing with frustrating plastic packaging.

Louis Gallois said the European defense contractor was stepping up pressure on German and French shareholders to reach an agreement that would let them sell their shares.

Cuadrilla acted after two small earthquakes occurred near a test well in Lancashire, England, where the company was using fracking to explore for natural gas.
• More Business News »
at June 01, 2011 No comments: Links to this post

Email ThisBlogThis!Share to TwitterShare to FacebookShare to Pinterest
Labels: FINANCIAL AND FOREX INFO

Gold Mineweb Top Stories: This year, it may pay gold investors to hang around in May