Mouse virus doesn't cause chronic fatigue: reports
at May 31, 2011 No comments: Links to this post

Far from a real recovery, the U.S. housing market has entered a double-dip recession, as evidenced by data released Tuesday. U.S. home prices fell in March for the eighth straight month, and home prices in 20 major U.S. cities dropped 0.8% in March on a non–seasonally adjusted basis, according to the Case-Shiller home-price index released by Standard & Poor's. The data are new, but the story's been hanging over our heads for some time. In fact, MarketWatch real-estate columnist Amy Hoak wrote about the looming double dip in our spring home-buying and selling special report. Home for sale this spring? Better luck next year.

MarketWatch commentary editor Rex Nutting writes today in his First Take analysis on the home-price news: Housing is still holding back the economy, nearly five years after the bubble began to deflate. And there's no end in sight. Nutting says there's been a lot of debate during the past two years about "why this economic recovery has been so awful." The biggest reason, he says, is housing — specifically, housing debt.

He writes: "Unfortunately, falling prices only make the debt burden tougher to handle. But lower prices are needed to revive the industry. Mortgage lenders and servicers need to face the facts: You lent out too much money and you will never, ever be repaid. You need to get serious about loan modifications, so you, the homeowners and the rest of the economy can move on. Otherwise, it's going to be years before housing stops being an anchor weighing us down."

Don't miss the story on the housing data, or Nutting's First Take column.

Say goodbye to the office cubicle

Companies are increasingly creating offices where workers can be more productive and collaborative, where ever-important natural light shines on the masses and people are generally happier to go to work.
Read more: Say goodbye to the office cubicle.

Treating Medicare's ills — and yours

There is plenty that current and future Medicare beneficiaries can do now and in the future to make sure they have adequate health-care coverage after age 65.
Read more: Treating Medicare's ills — and yours.

Housing still holding us back

Now that the current quarter is two-thirds finished, it is rapidly becoming apparent that, for the second quarter in a row, pundits overestimated the pace of economic activity, writes Irwin Kellner.
Read more: Latest ‘soft patch' catches economists off-guard.

The top-performing investment advisers persist in their bet from early January in believing that inflation will win out over deflation this year — despite sporting losses in each of the mutual funds they were highly recommending at the time.
Read more: Update on inflation-vs.-deflation battle.

Why no jail time for Wall Street CEOs?

It's the most-asked question to come out of the financial crisis: Why aren't any Wall Street CEOs in jail? Columnist David Weidner has the answers.
Read more: Why no jail time for Wall Street CEOs?

The House is expected to reject a bill Tuesday that would let the heavily indebted U.S. government borrow more money without any strings attached. Conservatives hope its failure sends a message to President Obama that he needs to support deep spending cuts.
Read more: Congress plans symbolic vote on debt ceiling.

U.S. consumer confidence declines in May

Consumer confidence fell in May as Americans grew slightly more pessimistic about job prospects and future business conditions, according to a closely followed survey.
Read more: U.S. consumer confidence declines in May.

FDIC: Financial Institution Letter: Electronic Filing by Banks Reporting to the FDIC Under The Securities Exchange Act of 1934 and Part 335 of the FDIC's Regulations

Financial Institution Letter
at May 31, 2011 No comments: Links to this post

WASHINGTON (MarketWatch) -- The prices of single-family homes in 20 major cities fell for the eighth straight month and confirmed that there is a double-dip in the housing market, according to the S&P/Case-Shiller home price index released Tuesday by Standard & Poor's. Home prices fell a non-seasonally adjusted 0.8% in March. Prices have moved down 3.6% in the past year. Home prices declined in 18 of the 20 metropolitan areas tracked by Case-Shiller in March compared with February. Washington D.C. and Seattle were the only markets where home prices increased in March.
at May 31, 2011 No comments: Links to this post

Which Burma to engage?

We can either deal with its brutal rulers or the forces working for democracy.

Sarah Palin’s bus trip points up a big problem for the GOP’s 2012 field.

Three things for the GOP to keep in mind if it wants to mend entitlements. Tom Toles cartoon
Click on the image for the full-size cartoon
Editorials
at May 31, 2011 No comments: Links to this post 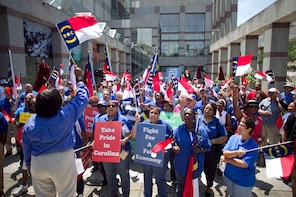 Amy Gardner
If GOP activists in N.C. feel confident heading into the 2012 election season, you wouldn’t know it by what they’re doing and saying. The dynamics are on display elsewhere in the South, too.
PostPolitics Headlines 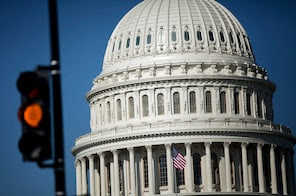 Washington is chock-full of experts who love to talk about their jobs. Putting a profile on WhoRunsGov is no different. If you meet the criteria, there is no reason not to add yourself to our directory. Read more about adding your profile .


Commentary
Stocks May Move Sharply Higher Amid Greek Bailout Optimism – U.S. Commentary
With traders expressing optimism about further financial assistance for Greece, stocks are likely to show a strong move to the upside at the start of trading on Tuesday. The major index futures are currently pointing to a sharply higher open, with the Dow futures up by 96 points. The upward momentum for the markets comes amid reports regarding the likelihood of another round of financial aid for Greece, which has been struggling to deal with its massive debt burden. (May 31, 2011) Full Article