Financial and Forex Info | The Australian Business Briefing | Asia to rival US in global markets: RBA

Email ThisBlogThis!Share to TwitterShare to FacebookShare to Pinterest
Labels: Financial and ForexInfo | The Australian Business Briefing

New Yahoo board member Akamai President David Kenny is the obvious choice to replace struggling CEO Carol Bartz, writes The Wall Street Journal’s Kara Swisher. Kenny is smooth and well-liked, has deep advertising experience, has a long relationship with Yahoo and its co-founder Jerry Yang and has tech cred as a leader of one of the Internet’s most important infrastructure companies, being in regular contact with media giants, ad networks and video providers that are Akamai’s clients, Swisher argues.

Microsoft explained the delay in updating its new phone software, partly blaming handset manufacturers for the problem. Microsoft’s JoeBelfiore did not name names, but said the company had started the update and ran into problems on some newly manufactured phones that would not function properly afterward. Samsung, HTC and LG Electronics are the main handset makers of Windows phones. A more comprehensive update, code-named Mango, will be available later this year, featuring performance bumps, live updates and applications that can run in the background while users move onto other programs, he said.

Russian hacker attacks on the country's biggest blog site and a spy agency's warning to Gmail and Skype have raised fears that authorities are tightening their grip on dissent in a China-like assault on free speech ahead of next year’s election, writes Thomas Grove. "This is a test drive during a very important year to see if it's possible to close down websites, in particular social networking sites in case of demonstrations," said Andrei Soldatov, head of the think-tank Agentura.ru.

Libyan students are using mobile phones, an amateur video camera and YouTube to offer a glimpse of the war in the besieged city of Misrata where journalists are prevented from reporting freely. Under their Freedom Group channel, the group has posted some 130 videos, some of which include chilling footage of fierce street battles.
at April 13, 2011 No comments:

Mr. Harman made a late-in-life splash by acquiring Newsweek magazine and wedding it with a sassy Web site, The Daily Beast.

The beige book cited a "steady improvement" in manufacturing, often including hiring, and at least 10 districts noted "slight gains" in consumer spending.

To keep the deal from collapsing, BP must persuade Rosneft to extend the deadline or find a compromise with shareholders in its existing Russia venture.

In Galleon Case, a Clash Over Definitions

The former president of the Galleon Group, Richard Schutte, also said that Raj Rajaratnam's Intel trade could be explained by news about a rival, A.M.D.
• More Business News »
at April 13, 2011 No comments:

Spring is traditionally the start of an important home buying and selling season, but the decline in the U.S. housing market is keeping things from blooming this year, Amy Hoak reports today in our spring real-estate package. There may not be many buyers out there, but more people have been searching for homes in recent months, according to Realtor.com. So if you are among those who'd like to sell a house or buy one, what can you do? Well, today's special report can offer some help. Hoak advises on how to win if you're competing against a cash bidder. And Jennifer Waters writes about how staging your home can make all the difference in a buyer's market.

Home for sale this spring? Your outlook is bleak

It's spring, that time of year when many prospective home buyers begin the hunt for their next residence. But with home-price declines, more foreclosures to come and slow improvements in the employment market, some say it's likely this year's buying and selling season will be another bust.
Read more: Home for sale this spring? Your outlook is bleak.

Buying a home? There's an app for that

If you're in the market to buy a home, a slew of new smartphone apps aim to make the job easier and save you time, Amy Hoak reports.

Watch the video: Buying a home? There's an app for that.

Why a mortgage puts a home buyer at a disadvantage

For home buyers who need to finance their purchase using a mortgage, a cash buyer can be their worst enemy.
Read more: Why a mortgage puts a home buyer at a disadvantage.

Staging your home to sell

Home stagers help you clear out the clutter and create style that sells.
Read more: Staging your home to sell.

One of the best ways to celebrate the end of the frustrations of tax season is to trash documents that clutter the filing cabinet but aren't needed anymore.
Read more: Five financial records you can trash now.

Tax Freedom Day? Probably not for you

We're 102 days into the year and "Tax Freedom Day" is finally here. On Wednesday, U.S. taxpayers earned enough money to pay their taxes for the year, according to the Tax Foundation. But some experts say that for most Americans, "tax freedom" comes much earlier.
Read more: Tax Freedom Day? Probably not for you.

Sales at U.S. retailers increase 0.4% in March, slowing from 1.1% growth for February. However, sales excluding gasoline show just a 0.1% month-to-month rise, according to government data. Economists are divided over what conclusions, if any, to draw from the March figures.
Read more: U.S. retail sales rise 0.4% in March.

No room for error in earnings season

It should come as no surprise if the market punishes companies that report worse-than-expected financial results this earnings season.
Read more: No room for error in earnings season.

Investors could be in for a nasty surprise if first-quarter corporate federal income-tax collections are any indication.
Read more: Earnings death or taxes.

The air is getting thin for Australian dollar bulls as the currency trades near post-float highs.
Read more: Aussie bulls test fear of heights.
at April 13, 2011 No comments:


WASHINGTON (MarketWatch) -- The Japanese earthquake may be having more of an impact on the U.S. economy than previously believed, according to the Federal Reserve's latest Beige Book survey of current economic conditions released on Wednesday. A majority of the Fed's 12 regional districts reported "actual or expected disruptions to sales and production" as a result of the Japan earthquake. Overall, the Beige Book found that activity generally continued to improve since early March although some districts reported only moderate gains while others were more upbeat. The report found that more businesses were trying to pass along higher costs to consumers but were having mixed success.
at April 13, 2011 No comments:

In a speech on Wednesday, President Obama called for cutting
the nation's budget deficits by $4 trillion over the next 12
years, countering Republican budget plans with what he said
was a more balanced approach that relies in part on tax
increases for the wealthy as well as on spending cuts.

In a speech that serves as the administration's opening bid
for negotiations over the nation's fiscal future, Mr. Obama
conceded a need to cut spending, rein in the growth of
entitlement programs and close tax loopholes, officials said
shortly before he spoke.

But he also insisted that the government must maintain what
he called investment in programs that are necessary to
compete globally. And he made clear that, despite his
compromise with Congressional leaders in December, Mr. Obama
would fight Republicans to end lowered tax rates for wealthy
Americans that have been in place since President George W.
Bush championed them in the last decade. 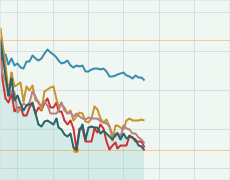