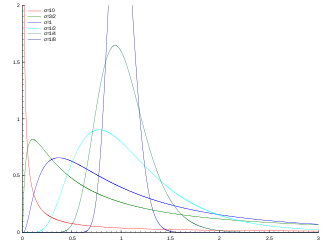 Log Normal Distributions, Wiki
This chart is reversed from the format of normal economic yield curves, and the X axis is transaction rate under QM Theory. All of these 'spectrums' are normalized about 1.0, lets call that potential growth. These curves slope down to the left of 1.0, but we do not see that in normal yield curves because that spectrum gets bundled within the firm at the long end of production.

By MarketWatch
In case you missed them, here are the top 10 Personal Finance stories from MarketWatch for the week of Aug. 16-20:


The new GM to hit market with new hopes, old ghosts
The second-biggest IPO in U.S. history is finally winding its way toward Wall Street, and while the road ahead is fraught with hazards, some analysts still see big potential in a rebuilt General Motors.
See Weekend Investor on should investors steer clear of GM IPO?


Unemployment hits your wallet for a long time
Since being laid off as a machine operator more than a year ago, Robert Blalock has drained his individual retirement account. Now the 56-year-old resident of Fernley, Nev., doesn't expect to retire until his 70s.
See Ruth Mantell's Diary of a Recession Baby on unemployment's long-term effects.


Overdraft fees protect the bank, not you
I stopped in at my bank this week, and the woman in line ahead of me was a friend of mine. The teller was finishing up with her transaction when she reminded my friend that her account no longer had debit-card overdraft protection.
See Chuck Jaffe on overdraft fees protect the bank, not you
at August 21, 2010 No comments: Links to this post