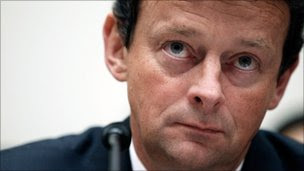 BP chief Tony Hayward, widely criticised for his handling of the US oil spill, is negotiating his exit, with an announcement expected within 24 hours.

India warned of stagflation risk as price of food soars

As David Cameron leads a giant delegation of British businessman to India, the tiger economy is facing the worst overheating crisis in a decade and may have to jam on the brakes.

WA economy roars as Qld, NSW snore
Research shows Western Australia is the best-performing economy in the country, supported by a strong labour market and increased demand for resources from India and China.


Cooper Basin operation still recovering from floods: Santos
Oil and gas producer Santos says it is still not up to full production in central Australia's Cooper Basin after massive flooding earlier this year.

Nyrstar production to resume in August
Management of the Nyrstar lead smelter at Port Pirie in South Australia say a three-week shutdown is not a direct reaction to a recent spike in children's blood lead levels.

In Trader’s Cocoa Binge, Fear for Chocolate Prices
By JULIA WERDIGIER and JULIE CRESWELL (NYT)
A hedge fund manager has all but cornered the market in cocoa, helping to drive prices in London to a 30-year high.
More Articles On This Topic »
at July 25, 2010 No comments:

Submitted by cpowell on 08:59AM ET Sunday, July 25, 2010. Section: Daily Dispatches 11:55a ET Sunday, July 25, 2010
Dear Friend of GATA and Gold (and Silver):
Gene Arensberg's new "Got Gold Report" finds enormous and fast short covering in gold by the large commercial traders and notable short covering in silver. Arensberg also argues that the big problem with manipulation of those markets is not the lack of trading position limits but the market concentration resulting from the exemptions granted by market regulators to so-called "bona-fide hedgers." You can find Arensberg's "Got Gold Report" at his Internet site here:
http://www.gotgoldreportsubscription.com/COTflash20100725.pdf
CHRIS POWELL, Secretary/Treasurer
Gold Anti-Trust Action Committee Inc.

Submitted by cpowell on 09:27AM ET Sunday, July 25, 2010. Section: Daily Dispatches 12:24p ET Sunday, July 25, 2010
Dear Friend of GATA and Gold:
Ian Gordon of the Longwave Group in British Columbia has just published a wonderful study showing the performance of gold against the Dow Jones Industrial Average going back 120 years. Gordon notes that "gold and paper are forever at war with each other" and that each is dominant over decades-long cycles. He argues: "To make money you either have to be invested in stocks or gold. You should never be invested in these two investment mediums at the same time." His charts bear him out and show that we're in the middle of a gold cycle with a long way to go. Gordon's study is contained in Longwave Group's subscription newsletter, "Winter Warning," but he has generously consented to GATA's sharing it with you here:
http://www.gata.org/files/LongwaveGroupReport-07-19-2010.pdf
CHRIS POWELL, Secretary/Treasurer
Gold Anti-Trust Action Committee Inc.

Join GATA here:
New Orleans Investment Conference
Wednesday-Saturday, October 27-30, 2010
Hilton New Orleans Riverside Hotel
http://www.neworleansconference.com/redirect.php?page=index.html&source_...
* * *
Support GATA by purchasing a colorful GATA T-shirt:
http://gata.org/tshirts
Or a colorful poster of GATA's full-page ad in The Wall Street Journal on January 31, 2009:
http://gata.org/node/wallstreetjournal
Or a video disc of GATA's 2005 Gold Rush 21 conference in the Yukon:
http://www.goldrush21.com/
* * *
Help keep GATA going
GATA is a civil rights and educational organization based in the United States and tax-exempt under the U.S. Internal Revenue Code. Its e-mail dispatches are free, and you can subscribe at:
http://www.gata.org
To contribute to GATA, please visit:

Email ThisBlogThis!Share to TwitterShare to FacebookShare to Pinterest
Labels: The Gata Dispatch

The second quarter is getting no respect. Only a few weeks ago, the quarter was strutting along the beach. Now even economists are kicking sand in its face.
See full story
ETF Investing: S&P 500 ETF may be sending bearish signal

By John Spence MarketWatch
Investors are hoping a summer rally will revive their battered stock portfolios, but the recent action in a key exchange-traded fund tracking the Standard & Poor’s 500 Index suggests a troubling lack of buyer conviction. See full story