By Francesco Guerrera in New York and Alan Rappeport in Washington
Published: April 4 2010 22:07 | Last updated: April 4 2010 22:07
Robert Rubin, the former Treasury secretary who played a key role in financial deregulation during Bill Clinton’s presidency and who has kept a low profile since stepping down as a special adviser to Citigroup in January 2009, is to be questioned by the US financial crisis inquiry commission this week.
The committee, created by Congress and given sweeping powers in May 2009, is also to question Chuck Prince, the former chief executive of Citi, as well as Alan Greenspan, former chairman of the Federal Reserve Board.

The line-up suggests the committee is narrowing the scope of its investigation ahead of a final report to Congress in December.
Phil Angelides, the commission’s chairman, said he would ask Mr Greenspan, who led the Fed between 1987 and 2006, why the central bank did not curb subprime lending before the housing bubble burst.
Mr Angelides, a former California state treasurer, said: “The fact is that the Fed, as the main regulator, had the power to impose rules that would apply to everybody.
“We need to peel the veil from these events so that the American people find out what really happened.”
On Sunday, Mr Greenspan appeared to be clinging to his free market ideology, telling ABC News there remained “no alternative” to competitive markets in democratic societies and that regulators could not have foreseen the events that would follow the collapse of Lehman Brothers.
Bill Thomas, vice-chairman of the FCIC and the former Republican chairman of the House’s ways and means committee, said he would ask Mr Greenspan: “what did you know, when did you know it and if you didn’t know it, why didn’t you know it?”.
Mr Angelides and Mr Thomas said the questioning of Mr Prince and Mr Rubin, who have kept a low profile since leaving Citi, will focus on how a once-mighty financial giant lost more than $50bn and had to be bailed out by the US government.
Mr Angelides said Mr Prince would be confronted with his famous assertion - in an interview with the Financial Times in July 2007 - that Citi was “still dancing” to the tune of the cheap credit-fuelled boom.
None of Mr Rubin, Mr Prince nor Mr Greenspan could be reached for comment.
Copyright The Financial Times Limited 2010. You may share using our article tools. Please don't cut articles from FT.com and redistribute by email or post to the web.
at April 04, 2010 No comments:

A storage room in a home in El Centro, Calif. after the earthquake.

Jennifer Steinhauer on the Quake

People gathered outside in Tijuana, Mexico, after a 7.2-magnitude earthquake hit the area on Sunday. 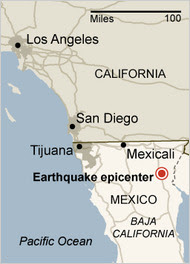 Chandeliers swayed, homes shook and the earth seemed to slide under the feet of people emerging from Easter church services for well over a minute as the quake rocked states in Mexico and the United States.
The 7.2 quake struck just after 3:30 p.m. local time, and was centered 16 miles south-southwest of Guadalupe Victoria in Baja California, Mexico, and about 108 miles east-southeast of Tijuana, according to the U.S. Geological Survey.
Carlton Hargrave, 64, was standing in the entryway of Family Style Buffet in Calexico, a California border town, when the quake hit. His restaurant, he said in a telephone interview, was “almost completely destroyed. We’ve got tables overturned, plates broken on the floor.”
“The ceilings caved in. It was big. I mean, it was major,” he said with a shaky voice and the sound of his feet crunching rubble and glass and plate fragments.
Reports from the remote area in Mexico where the quake hit were slow in coming and Mexican Web sites were overloaded in the two hours following the shaking, but an earthquake of that size would probably cause major property damage and perhaps injuries to anything or anyone near its epicenter, experts said.
A reporter in Tijuana for the newspaper Frontera who did not want to give his name said there were no reports of damage or injury there but reporters were awaiting definitive word from the authorities.
El Imparcial, a newspaper in the state of Sonora, south of Arizona, reported cracks in condominium buildings in Mexicali and burst pipes but the damage did not appear severe.
The shaking was particularly acute in San Diego, where the quake set off several alarms and sent the San Diego Fire-Rescue Department out on several calls, according to the San Diego Union Tribune’s Web site.
“We have some reports of scattered property damage,” Ramona Hastings, a sergeant assigned to the watch command at the San Diego Police Department, said in a telephone interview. Among the reports were several burst pipes, including at least one under a house, and damage to a three-story apartment building.
In Los Angeles, homes slid from side to side for well over a minute, a nauseating and seemingly endless wave that could be felt from the beach to the Hollywood Hills. Twitter was quickly filled with reports from the border to Phoenix to Los Angeles.
“People were outside crying because the beams looked like they were going to collapse and a wall cracked (along with various things falling) and the power went out in some parts,” read one message from Calexico. In Imperial, California, another border city, Eslibonita tweeted, “It’s still going.... My dresser fell on my and half of my fish tank’s water is on my carpet.”
The earthquake occurred about 6.2 miles below the earth’s surface, considered a shallow depth by experts. A 7.2 earthquake has the capacity to cause major damage, including destroying masonry and frame structures, cracking the ground and triggering landslides. Water can also be sloshed over riverbanks and rails can be bent.
At least five possible aftershocks were reported, including a 4.5-magnitude quake 62 miles east of Tijuana, reported at 4:09 p.m., and a 5.1-magnitude quake near Imperial, Calif., at 4:15 p.m. A 3.8-magnitude quake was also reported 12 miles northwest of Jacumba Hot Springs, Calif. at 4:19 p.m. A 3.6-magnitude quake was reported 7 miles northeast of Julian, Calif., at 4:22 p.m.. A 4.3-magnitude quake was reported 15 miles west-southwest of Calixico, Calif., at 4:34 p.m., and a 4.7-magnitude quake was reported 14 miles south-southwest of Mexicali, Baja California in Mexico, at 4:37 p.m.
Emergency officials urged residents to contact each other using text messages in order to keep cellphone signals clear for emergency workers responding to distress calls.
A viewer told CNN that their boat in San Diego Harbor began rocking from the quake and that pilings began shaking for several seconds.
The quake quickly affected other areas. In Century City, KABC-TV reported that a woman was trapped in an elevator in Century City. And at the LAX Airport, some passengers told CNN that they had felt rumbling and were worried that flights might be delayed.
People in Arizona and Nevada reported feeling the quakes. “My family and I live in Gilbert, Arizona, and we could feel the house shake and our pool was sloshing against its sides,” said Donald Whiting. “I’m not sure how far we are from the epicenter, but it’s no surprise Los Angeles felt this one.”

Steven Pearlstein
Commentary on business and the economy.

Charities boosted profits of the Erickson retirement empire before it went bankrupt.

Apple and its customers have the routine down. They are a special type of technology enthusiast who get the first version of every Apple product. They also enjoy the spectacle of first-day releases.

The Obama administration postpones a decision on whether to brand China a currency manipulator, skirting a public confrontation by announcing plans to instead pursue broader discussions about how best to secure a global economic recovery.

MOney Morning Can You ever Get Richer Whenever the Govt. Does Someting Stupid, April 3rd, 2010

Can You Really Get Richer Whenever the Govt. Does Something Stupid?
You won't hear about this "investment" from Wall Street brokers. You won't read about it in Barron's either. But it has the power to make you richer every time the govt. in Washington does something really stupid. (Yes, that means you could be making a LOT of money right now.)

Even better, you'll learn about this amazing new opportunity for free. Just scroll down to page 6 of this report for details.

By Keith Fitz-Gerald, Chief Investment Strategist, Money Morning
U.S. President Barack Obama generated a lot of hubbub with his decision to open up parts of the Atlantic Ocean and Gulf of Mexico to oil drilling.

We've all heard the criticisms that some of the geological surveys are as much as 30 years old, and the arguments that the ecological impact of drilling off the U.S. East Coast isn't worth the accessible oil, which some critics estimate could play out in as little as six months at current demand levels.

But even after more than a day of debate over the motivations for - and possible results from - President Obama's apparent energy policy about-face, one thing is very clear: This announcement has nothing to do with oil.

It's all about the U.S. dollar.

Three years ago, a microcap energy company made a fateful decision. It would sell off all American assets and pour the proceeds into one "make or break" project overseas. If it succeeded, the jackpot could exceed $2 TRILLION.

Well, it has finally succeeded - and them some. And that's about to trigger potential gains of as much as 1,000% for some fast-response investors. For details, please go here and scroll down to page 3.

Question of the Week: Do the Pitfalls Outweigh the Promise For the New Healthcare Reform Program?

When U.S. President Barack Obama signed the new healthcare-reform bill into law yesterday (Tuesday), it ended months of political bickering and maneuvering, and began a new chapter in the nation's healthcare saga - one in which the country will feel the effects of this sweeping, costly and controversial policy overhaul.
The fact is that many Americans will have healthcare for the first time ever. Offsetting that bright spot, however, is the reality that the program could add trillions in debt to the country's already burgeoning national debt, further complicating the matter.
Going forward, it will now be left to the pundits, analysts and the healthcare industry to decipher what these provisions really mean for the industry, for individuals, for taxpayers - and even for investors.
But here at Money Morning, we wanted to know what you think about this new law. That's why we made healthcare reform the inaugural topic in our new "Question of the Week" feature.
Money Morning Question of the Week: U.S. President Barack Obama's controversial healthcare proposal is now law. What do you think? How do you feel? Do you think it's a beneficial or harmful move for you as a consumer, as an investor, and as a taxpayer? What do you think it means for our nation's economy?
What follows is a sampling of the enthusiastic and passionate responses that we received. Make sure to also check out next week's "Question of the Week," a query that seeks your thoughts on the growing levels of U.S. debt.