FIGHTING AGAINST SWINDLERS
After several searches  made   using  Google Search Engine, The undersigned, owner of the blog FGC BOLSA - FGC FINANCIAL MARKETS., using the word  " fgc bolsa"  as the key word, found the  results shown in the snapshot below. 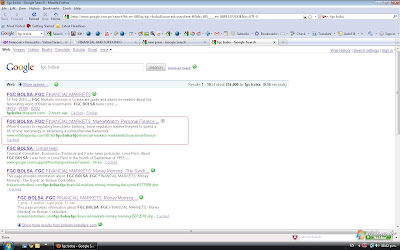 Clearly, on second  place was the website www. milliongossip.com.

In second place ( See snapshot Above), the page found was practicing  the strategy  to use other blog's name with the heading of article and  theme that are treated in others blog with the objective, to appear within  the first ten results, as it occurs with my blog.  In effect , after I made a click on the blog , using my name,what appeared was the name of my blog on the top of this website, with a tag that has nothing to do with the themes  I treat in my blog.

Consequently, I hereby publicly denounce this site  as a swindler, website.
The blog : FGC BOLSA - FGC FINANCIAL MARKETS with the website address http://www.fgcbolsa.blogspot.com reserves its rights the international Internet regulations and norms against  swindlers practices, to take to court to  whoever will result responsible. of this burglary.
February 15, 2010
Fernando Guzmán Cavero

Live online debate: Is China good for Africa?
Our one-week debate on the pros and cons of China's closer engagement with Africa opens today. Vote and share your views.
Full article
at February 15, 2010 No comments: Links to this post

E.C.B. President Defends Measures on Greece
By DAVID JOLLY (NYT)
Jean-Claude Trichet, president of the European Central Bank, said there was no doubt about the commitment of the Continent’s governments to aiding the beleaguered country.
More Articles On This Topic »
at February 15, 2010 No comments: Links to this post

Email ThisBlogThis!Share to TwitterShare to FacebookShare to Pinterest
Labels: NYT : MY ALERTS

Breaking News Alert
The New York Times
Mon, February 15, 2010 -- 11:18 AM ET
-----
Democratic Sen. Evan Bayh of Indiana Will Not Seek Re-election
Mr. Bayh will announce his decision in a press conference at
2 p.m. on Monday, an aide confirmed.
Read More:
http://thecaucus.blogs.nytimes.com/2010/02/15/bayh-decides-against-re-election-bid/?emc=na
-----
Now get New York Times breaking news alerts sent to your mobile phone.
Sign up by texting NEWSALERTS to 698698 (NYTNYT).
-----
About This E-Mail
You received this message because you are signed up to receive breaking news
alerts from NYTimes.com.
To unsubscribe, change your e-mail address or to sign up for daily headlines
or other newsletters, go to:
http://www.nytimes.com/email
NYTimes.com
620 Eighth Ave.
New York, NY 10018
Copyright 2010 The New York Times Company
at February 15, 2010 No comments: Links to this post