Gold Down: What Gives? 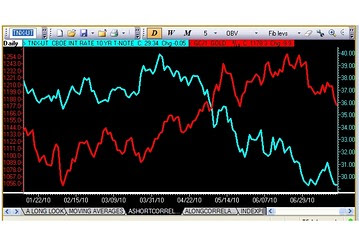 A lot of chatter out there about the ugly looking gold charts. The yeller metal is down about 6.2% from its recent peak of $1,258.30 on June 18, breaking through its 50-day moving average. It’s still a healthy margin above the 200-day moving average, of around $1,144 an important gauge of momentum. So what gives?
It’s tough to say exactly. Gold’s been something of a bulletproof asset class in recent months, and supporters seem to have found a rationale for buying the shiny rock regardless of economic conditions. Economy showing signs of strength? Surely that increases the likelihood of policy makers overshooting and sending us into an inflationary spiral. The solution? Buy gold!
What’s that you say? Worried that overly indebted governments are going to pull the economy back into recession, thereby forcing the world’s central banks to embark on another spate of money printing to get the economies moving again? Here’s an idea: buy gold!
But according to the market watchers over at Jefferies Equity derivatives, it might be growing increasingly tough to justify buying gold amid worries about persistent disinflation — and even the possibility of outright deflation.
A look at a chart between gold futures prices and the 10-year Treasury yield suggests that gold is taking more of a cue from the persistent dive lower in interest rates, and its seems that the gold bugs have yet to come up with a decent rationale to buy the metal in a potential deflationary environment.
at July 19, 2010

Email ThisBlogThis!Share to TwitterShare to FacebookShare to Pinterest
Labels: The Wall Street Journal

DealBook: The ‘Moment of Truth’