Chinese Premier Wen Jiabao agrees to begin bilateral negotiations on a treaty over gas fields in the East China Sea.

The Hatoyama administration finds itself in an increasingly tight spot after the Social Democratic Party signals it would side with a no-confidence motion against the Cabinet.

JAL ends all flights in and out of Kobe

Japan Airlines terminates all of its flights at Kobe Airport as part of its restructuring.

Hoped-for Chinese stand against North not in cards

Aussies cool down toward Japan

Cabinet support rate falls to 19% over air base feud

The MSCI Asia Pacific Index declined 0.4 percent to 113.04 as of 10:20 a.m. in Tokyo, with more than two stocks gaining for each that fell. Japan’s Nikkei 225 Stock Average lost 0.8 percent before a meeting between Hatoyama and Ichiro Ozawa, secretary-general of the ruling party, to discuss the party’s future.

Chinese equities may be active after a purchasing managers’ index showed the country’s manufacturing industry expanded at a slower pace in May. Australia’s S&P/ASX 200 Index dropped 0.8 percent. The Kospi Index slumped 0.4 percent in Seoul.

Exporters in Japan declined as the yen strengthened to 111.59 per euro today from 112.59 at the 3 p.m. close of stock trading in Tokyo yesterday, while appreciating to 90.99 per dollar from 91.52. A stronger yen reduces the value of overseas sales at Japanese companies when repatriated.

Japanese stocks fell after Hatoyama pledged appropriate action in the face of plunging approval ratings. Three polls released on May 30 showed Prime Minister Hatoyama’s rating at or below 20 percent and six in 10 voters think he should quit.

Canadian Dollar Eases Against Most Majors

The major U.S averages lost around a percent each on Friday after ratings agency Fitch downgraded Spain's credit rating. However, the Dow futures are now rising by 46 points. The U.S. markets will remain shut today for the 'Memorial Day' Holiday. The U.K market is also closed for the Spring Bank holiday.

After settling down 0.8% at $73.97 a barrel on Friday, light, sweet crude futures for July delivery are now trading firm above $74 a barrel in Asian trading.

Fitch Ratings downgraded Spain's Long-term foreign and local currency Issuer Default Ratings to 'AA+' from 'AAA'. The rating outlooks on both long-term IDRs are Stable. This comes a few weeks after S&P downgraded Spain one notch to AA from AA+ and kept a negative outlook.

In other economic news, European Central Bank President Jean-Claude Trichet on Monday said emerging countries remain a source of strength for the world economy following the global financial downturn. 'One distinctive aspect of this crisis has been its originating in industrial economies,' he said via a video address to a Bank of Korea conference in Seoul.

'Emerging economies have also been severely affected, but as a group remained a source of strength for the world economy. It is therefore not surprising that the crisis has led to even better recognition of their increased economic importance and need for full integration into global governance, ' he said. 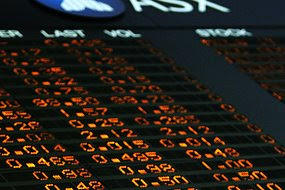 The Australian stock market is poised for a fall, with Wall Street and London both closed overnight.

Posted June 1, 2010 07:18:00
Investors on the local market will be taking their cues today largely from official data and from the Reserve Bank's decision, with both London and New York stock exchanges closed overnight for public holidays.

Rates predicted to stay on hold

The Reserve Bank board is tipped to leave the official cash rate unchanged at 4.5 per cent when it meets today.

Home price growth has slowed dramatically after more than a year of strong gains, as six recent interest rate rises start to bite.
at May 31, 2010 No comments: